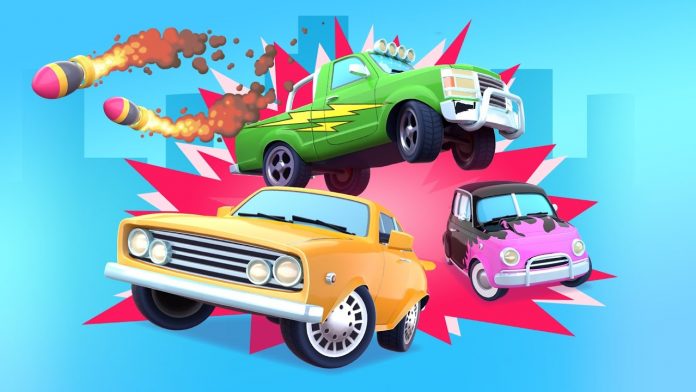 Smash, crash, boom! It’s constant, non-stop mayhem in Crash Club Drive & Smash City! In this top down arcade-style game, you’ll drive against other human players in real time. Smash City is an open area perfect for firefights and high-speed chases, so get your gear ready! You’ll need to smash the city to pieces to find tokens, which you can spend to buy new weapons and upgrades! We’ll help you smash the competition with our Crash Club Drive & Smash City cheats, tips and tricks strategy guide!

We’re sure that you want to keep the action going, so let’s get started with our Crash Club Drive & Smash City tips and tricks guide.

When you first enter the online arena, keep in mind that you’re going up against real human players! If they see you starting out fresh, they will most likely try to tear you apart. It’s in you best interest to stay away from the carnage for now and instead smash any random objects you come across. You’ll need to gather some tokens before you stand a fighting chance, so ignore enemy cars and flee if you have to. Smash everything you see and be sure to remember any Stop-N-Go’s you see along the way, as you’ll need to revisit them to finally get some weapons.

You can buy a variety of items at Stop-N-Go. In addition to the weapons, there are sometimes permanent upgrades you can buy for your car. Well, permanent for the rest of that run. Once you go boom, you’ll start from zero again. These upgrades however are pretty useful. They’ll grant you things like increased armor, health regeneration, and more. The health regeneration upgrades is especially important, as it can ease up on your repair bills as long as you find a safe place to duck into. These upgrades come in tiers, denoted by the roman numeral next to it. You have to buy the upgrades in chronological order, so you can’t skip tiers.

Green gems are the premium currency of Crash Club. You get some of them when you level up sometimes. The only other way to get more is to find your daily amount of gems. Every day five gems are hidden in random objects across the city. You’ll probably find some on complete accident, but if you’re looking for them intentionally make sure to keep an eye on the counter. At the top right you’ll see how many gems you’ve collected for the day, but more importantly the gem counter will actually start flashing when you’re close to a hidden gem. If you’re strolling through the city, keep glancing over to see if the gem is flashing.

You can always drive into any Stop-N-Go as long as you have at least one token. This is handy if an enemy is on your tail and they’re relentless. You can easily deny them a kill and also save your own hide in the process. While you always spawn into the game in random locations, Smash City itself never changes. Try to keep the Stop-N-Go locations memorized so you have a place to go in case of emergency!

You can spend your hard earned gems on new cars. To buy the better cars, you’ll need to draw from the current tier a certain number of times. For example, you have to draw three Compact cars before the Sedan draw unlocks. As you unlock the better tiers, your chances of drawing a higher rarity car increase. Eventually you’ll have good chances of drawing a Legendary car, which comes with three abilities built-in.

That’s all for Crash Club Drive & Smash City. If you have any other tips or tricks to share, let us know in the comments below!