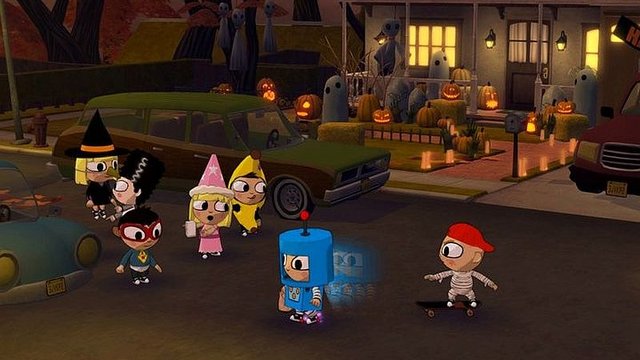 Halloween is right behind the corner and what better way to get ready for it by playing a nice little Halloween themed game while waiting for the mayhem to begin?

Double Fine’s Costume Quest is now available for purchase on the App store, playable on both iPhone and iPad. The game has been originally released on Xbox Live and Playstation Network Store and it’s the game that prevented the team from being dissolved, following Brutal Legend ‘s horrible sales.

Costume Quest is a nice little role playing game that really takes you in with its charming characters and setting. It really feels like you’ll be watching the world around you with the eyes of a children. It’s no surprise, considering the main characters are children!

The game stars Reynold and Wren, a pair of twins that has been forced by their parents to go trick or treat on Halloween. During the candy hunting, however, one of the twins gets kidnapped by some monsters that plan to get all the local candy for themselves.

To reach your final goal, you will have to unlock a gate at the end of city with all the candy that can be gathered in town. Knocking on the doors will result in either candies or turn based battles against monsters.

This simple description doesn’t really manage to capture the charm behind the game. Check out a trailer for the game at the end of this post and get ready to open your virtual wallet!

Costume Quest is now available for purchase for £2.99 / $4.99 on the app store. The game is available on both iPad and iPhone.