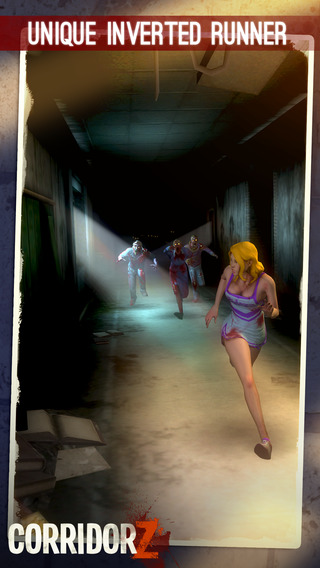 No one knows how or why it happened, but an ordinary high school has turned into a zombie nightmare! Corridor Z is a twist on the endless runner genre – you’re running towards the camera, not away! There are zombies on your tail, so let’s get the chase started with our Corridor Z cheats, tips and tricks strategy guide!

1. Listen for the “hiss” sound effect!

Since you’re running towards the camera, it’s kind of tricky reacting to things since they come out of nowhere. With that said, both weapon and ration pick ups are announced by a very distinct “hissing” sound effect. This is because there are lit flares next to both of those pick ups, so that you know they’re coming up. If that’s not enough, weapons have a red glow to them, while rations have a orange glow. Keep you ear close for a hint when these pick ups are coming up! Other picks up worth mentioning are the story-related documents, Jill’s diary. These have a blue glow to them with an audible beeping sound effect.

2. Watch for the green glow!

Taking down as many objects and buying as much time as you can is great and all, but if you miss just one turn that’s it! Your whole run is over! You should always keep an eye out for the green glow that the turn signs give off. The moment you see one, you can input the turn swipe immediately and your character will automatically take the turn. Don’t worry about doing it too early; you’d rather be early than late!

You should always be working towards your current missions. Completing all the missions on a character will move them up to the next classroom, and the further you go the more things you will unlock. You cannot progress completely until ALL characters have moved on, so go for knocking out those missions! If you want, you can even complete a mission then let yourself be caught by the zombies to move on. Do note though that the further you go on a single run and the more zombies you kill, the more rations you’ll earn at the end.

The gun you start out with, the pistol, is a decent enough weapon. When the zombies are way behind, you can take potshots at them to slowly whittle their health down. Though, there’s an alternative! The closer the zombies are to you, the higher chance you might land a headshot one, killing the zombie instantly. This is NOT guaranteed, though, so relying on it is very risky. You can, however, increase the chances of it occurring by upgrading the pistol. You can visit the armory on the main menu to spend rations to upgrade your weapons.

Everything changes once you get to classroom 3, though! Reaching classroom 3 unlocks the shotgun. This baby, when fired at zombies who are directly behind you, is a guaranteed headshot on all three zombies! Needless to say, you’re going to want to save the shotgun for emergency encounters.

Around the 800m mark, you will reach the cafeteria. Here you will encounter a random boss, but early it is almost always the infected lunch lady. She is a bit faster than the regular zombies, so you need to make sure you don’t miss any objects to throw down! Shoot her whenever you have the chance to damage her health. Once you defeat her, you will earn an automatic extra 50 rations at the end of that run. Awesome! 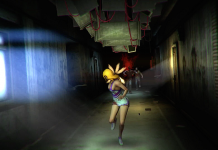