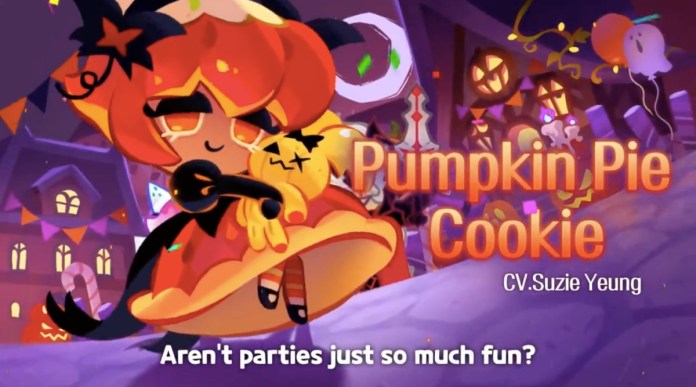 Cookie Run: Kingdom’s Halloween update brought a host of surprises including costumes for some of the Cookies, and a brand new Cookie to collect! Pumpkin Pie Cookie began her debut in the Featured Cookie Gacha where the possibility of winning her is higher than in the regular gacha. Find out below why you should want to get Pumpkin Pie Cookie for your team.

Pumpkin Pie Cookie is an epic rarity, magic class Cookie with a summoning skill. She is pretty fragile, a ‘glass canon’ type of team mate who is high on damage but low on defence. This means she is best positioned to the middle or back of the team. She is automatically put in the middle of the team, and uses her special skill Pompon, Help! Pompon comes bounding forward ahead of the team where they can act like a bit of a tank, giving some protection and dealing melee damage. Pompon damages up to 3 enemies and applies a non-stackable debuff. They also give all allies- even allied creatures- a 45% ATK SPD increase.

Swift Chocolate: Will minimise Pompon’s cooldown time, giving them another chance to be used in battle.

Solid Almond: Will increase damage resistance which increases Pompon’s use as a tank.

Let us know in the comments below what your favourite topping combinations are for Pumpkin Pie Cookie.