A-33 Studio, the ex-developer of Counter Strike Online, launched its own entry into the mobile shooter genre earlier this year. Combat Squad: Project Wednesday places you in charge of a paramilitary unit running and gunning around multiplayer maps. If its release passed you by, here’s what you’re missing out on.

The USP for this FPS is its Dive system. During one-versus-one gameplay, you’re leading a five-person squad of battle-hardened mercs, and can easily switch between members using Dive. The other soldiers will follow your tactical commands, guided by AI. This means you’re not stuck wielding one character around the map every round.

The controls are simple, especially if you’re used to mobile shooters. The onscreen sticks control motion and viewpoint – waggling the right changes the direction you’re looking, whilst the left is for moving about. There’s a middle button for manual shooting, or an auto-shoot option which can squeeze the trigger for you whenever your crosshairs settle on an enemy. Easy.
There are a range of characters you can select for your team, each with distinct combat advantages and disadvantages. You can further customise your mercs by equipping perks, with forty to choose from, so you can tinker to suit your play-style. 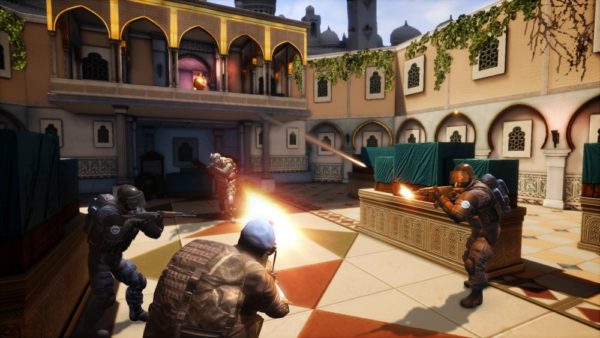 Along with the one-versus-one battle, Combat Squad lets you join forces in five-versus-five combat, with the AI taking a back seat. There are various explosive gameplay modes, including Zombie, Annihilation, Death Match and Demolition. All this trading of bullets takes place in abandoned villas, office blocks and industrial warehouses stretching from Central Asia to Europe. The kind of places you’ll be used to if you’ve ever dipped into the other CS.

So if you’re itching for an FPS to keep your thumbs busy, Combat Squad: Project Wednesday is free to download for Android and iOS.