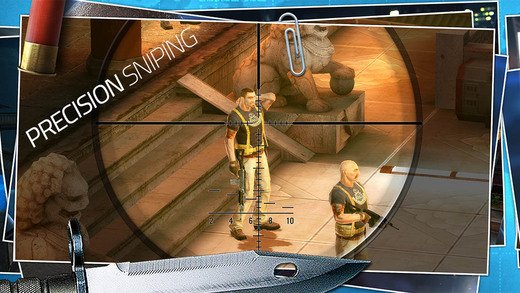 A new game in the Contract Killer series has been launched and it’s just as great as expected, but we’re not here to talk about that. Instead, we’ll try to help you get better at the game by sharing with you some Contract Killer: Sniper cheats and tips that can hopefully give you the ultimate strategy guide for the game and all the help you need to complete all the missions.

So if you’re having trouble getting the most out of the game, check out our Contract Killer: Sniper tips and cheats below!

1. Stay behind cover
Even though you will still get hit pretty often, if you stay behind cover you’ll receive less damage than being out in the air. So don’t forget to tap the button and get behind cover after shooting!

2. Check out all the targets
Some missions require you to eliminate a specific person, and it might just be one of the people lurking around, so you can complete a mission with a single shot. Even if that’s not the case, you should still check out all the guards to see their level and decide the order in which to take them out, as some are tougher opponents than overs. Which takes us too…

3. Eliminate your enemies in the right order
I would personally suggest to go for the most difficult first, since they can cause you most damage. Special forces and above, or higher level players, these are the ones you should start firing upon and take out most of their health with a well placed head shot. In other cases, when there’s a ton of enemies in an area, it’s better to take out the easy ones to reduce the number and then focus on the more difficult ones.

4. Head shots for best damage
It won’t always be easy to do it when under enemy fire, but you should give your best to try and get headshots, as they give you more damage and therefore get you rid of enemies faster.

5. Upgrade your base first
I know that you are tempted to spend those diamonds on weapon upgrades as soon as you have them, but you should instead focus on upgrading your base. a better defended base reduces the risk of you actually losing diamonds and gives you more storage and production, which can later on be used for all those sweet weapon upgrades. So focus on base upgrades at first and ignore all other missions.

6. Focus on PvP first
Which takes us to another important element: PvP battles. You gain diamonds from winning these levels, so you should focus on them early on: get enough to upgrade your base first, then move on to upgrade the weapons and then simply cruise through the missions with a top weapon.

7. Keep your weapons upgraded
After upgrading your base as much as possible, start working on those weapons: either using regular money or diamonds earned from PvP battles, start upgrading the base ones for better damage and stats and overall easier missions.

8. Take advantage of the free offers
Every now and then, Contract Killer: Sniper will give you a chance to earn some freebies by simply watching a video. Always say yes to these, as you can get free weapon upgrades or extra items that are extremely helpful.

9. Use the knives wisely
What I like the most about the knives is not the fact that you can take out enemies without alerting the guards, but the fact that you can take them out with a single shot. So in very difficult levels, it doesn’t hurt to target one or the most difficult to take out guard and one strike him out with a knife! Use them wisely, though, as you can only get them with premium currency.

These would be our tips and tricks for those playing Contract Killer: Sniper. Do you have anything to add? Let us know by commenting below!