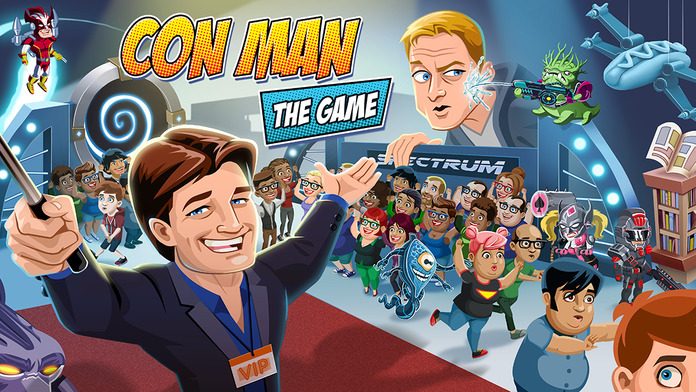 So, you want to be the manager of your own comic book convention? That’s exactly what Con Man: The Game gives you the chance to do, all while throwing in the mix some of the characters in the show. And we’re here to help make the experience even better by sharing with you a bunch of Con Man: The Game cheats, tips and strategies. Because, as you will see, life as a comic book convention manager is not easy.

So let’s not waste a single second and instead let’s check out some Con Man: The Game tips and cheats below!

1. Build as much as possible
I was reluctant at first to build too many booths, but that’s exactly what you should do in order to maximize profits. Don’t wait for the new ones to unlock: build what you can and demolish them later if you need extra space. Try to always build the booths that give you most profits and remember that the way you place them doesn’t affect sales.

3. Instruct people to do stuff when you leave
It is as if the game has a nose for it: as soon as I have my guard stay at the door for 5 minutes, the old lady strikes. Therefore, the best thing to do in order to get all the bonuses is to instruct your staff perform actions right before you quit playing. This way, you will collect the rewards when you get back and there will be no negative effects from events like the old lady.

The same method of leaving the game in order to prevent being forced to spend premium currency is when your Superhero(es) get low on health. As soon as their health is critical, leave the game and return later to have them at full health. The more time you spend in-game, the more aliens will attack and you will have to fight them. However, don’t expect to always do it on full health: you can still win battles easily even when at around 30% health left because the game will give you heart boosts during the fights.

4. It’s better to spend more time in the game
Despite all that I said above, if you’re looking to make some quick money in the game, there’s no other easier way than to actually spend time in-game, collecting the rewards. If you come, collect, leave and come back later it will take a lot longer to actually get some real dough for your classy comic con.

5. Get all the bonuses
Don’t forget to use all the bonuses that the game offers every now and then: from the option to throw that rad nerdy party for extra XP and coins, to collecting the bags (after 4, the 5th is a premium one!) and everything in between. Keep track of the timers and log in often in order to maximize your rewards in the game and progress faster than everybody else.

In the end, simply playing the game and being very active is what you should do in order to progress quickly and unlock everything. But if you have other tips and tricks, don’t hesitate to share them with us below.