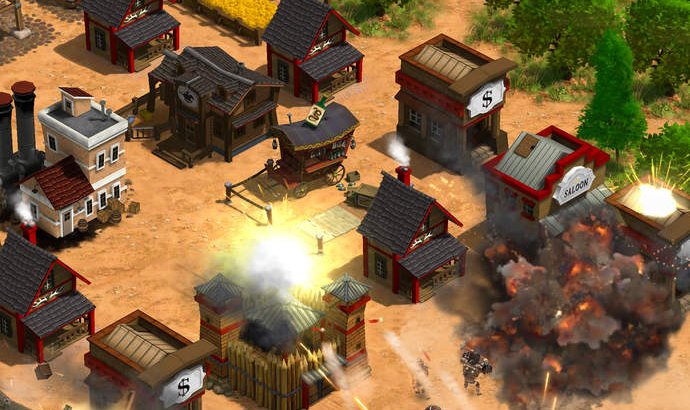 It’s been a while since I last played a game that’s as fun as Compass Point West and I am happy I started playing it a few days ago. It’s a perfect combination between the Clash of Clans type of strategy games and time management, with beautiful graphics and ton of room for future and amazing updates. Not to mention the interesting collectible card game mechanics which add a bit of extra flavor to the mix!

1. Focus on resources
Start early on by focusing on upgrading your resource silos and resource producing buildings because really soon things will get extremely expensive and you need the funds. Add the extra punch by capturing the nearby mines and farms to increase your hourly production (and don’t forget to actually collect that by tapping the horse carriages that appear near the entry point to your base, at the bottom of the screen).

2. Plan your upgrades right
Since you only have one builder to handle all your upgrades, you should always do your best to time them right. Consider any time boosts you might have when starting an upgrade and try to keep them going at all times – this means to either use the diamonds to rush production or log in often enough to keep the upgrades going. The faster you upgrade your buildings, the better.

3. Build the perfect base design
Although we’ll focus on this entirely in a future article, I should give you a few pointers on how to build a perfect defense layout for your base: all the incoming attacks will be from the bottom of the map, but they won’t be limited to entering through the door. I’ve seen a lot of bases build with all defenses in front of the door, which is wrong, because you can use the rally flags and smart placement to the sides to completely avoid them.

Instead, when building your defense, go with a first row of useless buildings (like the fort, healing building and so on) and behind them place the camps and the towers. Try to have them as close to each other as possible, so that each defensive building covers the other one. Also make sure to have a lot of troop cards in because they defend your base too. Finally, surround your Courthouse with the resource buildings, with your goal being that of protecting it in order to avoid defeat. I would also suggest placing the towers in front of the Camps.

4. How to attack for the best results
There are two types of attacks that you can perform: against Driller’s base and against other players. When it comes to the single player bases, things are really simple: scout the base first and notice what is the easiest route to the Base building, then deploy all your troops so that they follow that route. If needed, use the rally flag to guide them there: as soon as you destroy that building, you win it all.

You will get the most resources, though, by attacking other players. I recommend doing that as often as possible because it’s really worth it: scout the base first to see exactly what’s the layout of the base and how do the defenses look like. Try to see if you have an easy route (for example, if the players cram all the defensive buildings to one side, you can attack through the other and guide your troops with the flag to the Oil Refinrey). Use a combination of mid-range (Gunslingers), Tanks (Tin Men) and long range (Bombers) troops to destroy the base. Usually, you should have no problem if you mix and match and make sure you deploy new troops as soon as you get the extra spots.

5. Manage your cards smartly
You can get multiple types of cards in the game from winning PvP battles, from certain single player missions, from the free draws or Silver/Gold Packs. I would recommend to stick to the Basic Pack for as long as possible and draw cards there as often as possible. The most important cards, especially early on, are the troops so always select those over anything else. Manage them smartly: even though a Rugged card has better stats than the basic one, a Rugged troop is not better than four basic ones, so have this in mind when combining your cards: you need numbers too!

6. Collect the bags on the map
When you log in, go to the map and look for bags scattered there – tap them and you will earn free diamonds.

These would be, for now, our Compass Point West tips and tricks. If you have other suggestions, let us know by commenting below.