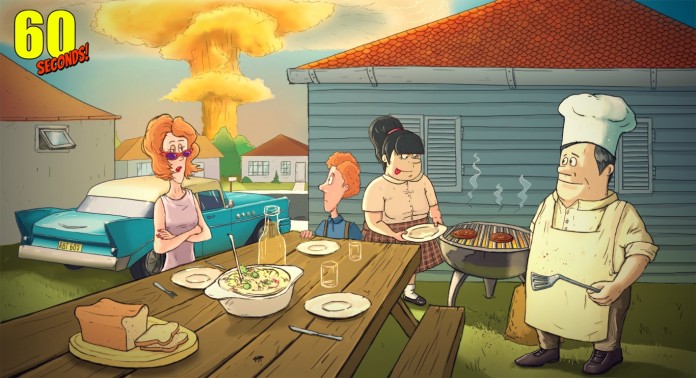 Another really unique game has been announced for iOS devices, a game where players will have to survive an impending nuclear war by gathering everything they might need in only 60 seconds.

The game, aptly named 60 Seconds, is not what gamers might expect. You won’t be controlling a fully armed super soldier, but just an average family man named Ted, who finds himself in the middle of this nuclear war. As soon as the alarm sounds, players will only have 60 seconds to grab anything of importance before having to run inside a fallout shelter.

No more details are currently available on the game, but the premise seems incredibly interesting. While the game’s overall tone will not be all that serious, as seen in the only promotional picture, the game’s premise opens up a lot of interesting gameplay possibilities. Gathering the items in 60 seconds is only the beginning, as players will have to manage the limited resources as well as deal with any potential danger inside the shelter.

60 Seconds will be released on iOS on a yet to be confirmed date. The team is currently shooting for a 2014/2015 release date. We will keep you updated on the game as soon as more becomes available on it, so stay tuned for all the latest updates.