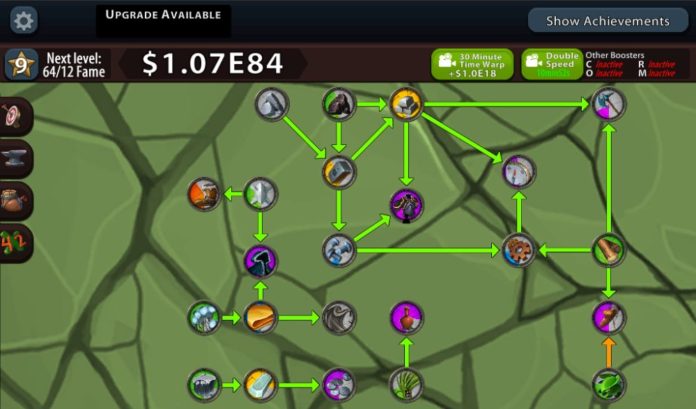 Colonization Idle Clicker is a beautiful idle game created by Bling Bling Games, the same studio behind the very similar Crafting Idle Clicker. Following the same mechanics, the game challenges you to build a real web of resource producing items and reap on the profits to get as far as possible in the game.

Keep an eye on production details
Tapping the icon of the item you’re producing opens up a menu. Tap the “Stats” button in the upper right corner in order to see more details about that particular item. The most important for you is “surplus”.

That data basically tells you how much of that particular item you’re producing in excess and you should always make sure that you create enough to support the production of the item that uses it as a raw material. The concept of the game is simple: maximize production of the base items first, them work up on the items that require those you have just upgraded and max those out as well.

My recommendation is to reach a decent level of production with each item, then minimize surplus of the base materials in order to increase your profits (the newer the item, the higher the profits).

Always focus on maximizing your top products
The latest item you have researched is also the one that gives you the biggest profits. So it’s always a good idea to focus on those items as soon as you unlock them.

However, when you unlock a new item that’s a base material, you can still work on the previous chain of items. But as soon as you add one that requires the previous as a material, you should make sure that you have maxed out production of the previous items and ignore them (only selling surplus every now and then). You have to do this because the early items become less and less profitable as you level them up.

Maximize income with Merchants
I don’t really get the point of Merchants in the game as the surplus can be sold manually, but they seem to matter when it comes to the time spent away from the game. So buy those as well if you want to maximize your offline profits. Assign them to your highest value items too in order to sell expensive items.

You could sell the items yourself manually when you get back to the game, but I have the impression that they merchants sell them at a higher price than what you’d get (the bonus being shown in the merchants menu).

Colonization Idle Clicker also offers you a nice option to fast forward time a bit by watching an ad, which is also useful to further boost your income quickly.

Restart only when you reach a new rank
At first, I didn’t really understood how ranks work and I restarted before reaching a new fame level. That is pointless, because it’s a new fame level that doubles your income and the points you get until there have no effect. So be patient and make money until you get to a new fame level – and when you do, restart immediately.

These would be our Colonization Idle Clicker tips and tricks. If you have anything else to add, don’t hesitate to let us know by commenting below.