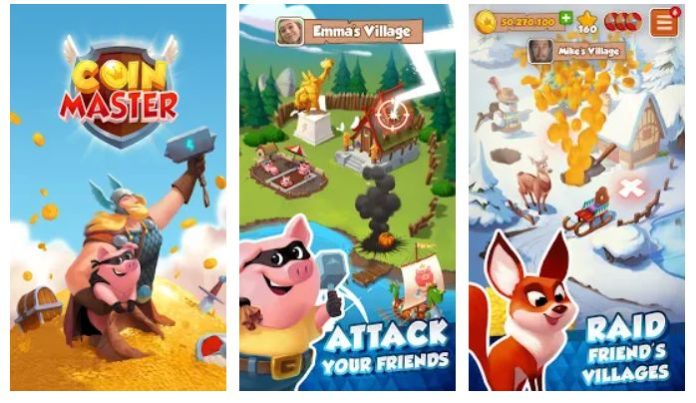 Extremely simple in concept, Coin Master is that type of game that you just can’t put down – or at least you can’t stay away from it for long. And today we’re here to help you make that time as productive as ever, by sharing a bunch of Coin Master tips and cheats in our complete guide to the game.

We have to admit that you don’t have to really be a rocket scientist in order to understand how things go in the game, where you will spend most of you time tapping a button. But there are some things that will indeed help make the entire experience more pleasant and profitable and that’s exactly what we’re going to talk about today.

So without further ado, here are some Coin Master tips and cheats to really become the ultimate coin master!

How to make money in Coin Master

Since this game is all about making money, let’s see what methods you have to fill your coffers!

The main way for you to make an extra buck will be from spinning. Depending on what the machine gives you, you will earn more or less money.

The second and third way come from attacking fellow players: either from getting three hammers (a regular attack) or three masked pigs (a raid, which allows you to dig three times on a player’s base and take more or less money from them).

It’s better when you play it with / against friends

Everybody’s playing Coin Master, so you should take advantage of this and link your Facebook account in order to connect with your friends and be able to raid their bases, attack them and get on their nerves. It’s definitely more fun this way!

After connecting your Facebook account, you will start getting the option to attack your friends when performing regular attacks, as opposed to being assigned to a random person otherwise.

In my group of friends, there have been a bunch of arguments and tantrums thrown this way or another because somebody believed that they were unfairly and constantly targeted by one of their friends – so keep this in mind as well. You don’t want a simple game like Coin Master to ruin a friendship.

You have to do something with all the coins that you collect in the game, right? Well, you do – and in this game the main thing for them is building various structures to progress through the eras and build more and more impressive bases or villages for bragging rights.

You have five buildings that must be constructed in each village before you are allowed to move to the next stage and there’s no real other way than to simply do it one building at a time.

The prices of the buildings increase as you build more and the buildings themselves do nothing except from looking cool and, as I said, giving you bragging rights over your friends in case you’re the most advanced of them all.

But as soon as you have enough money for a new building, make sure you purchase it – you don’t want somebody to attack you and lose them, right?

Guide to Pets in Coin Master

There are a few extra things in the game to keep everything more varied and interesting. These things are your pets and cards that you can collect to increase earnings, get various boosts and even pets.

The three pets that are currently available in the game are Foxy, Tiger and Rhino – each with a special ability that will help you either make more money or protect the fortunes you already have. Here’s what each of the pets in Coin Master does:

Foxy – you get an extra shovel in the game when raiding other players.

Tiger – increases the amount of coins you get when attacking players.

Rhino – he has a chance to block incoming enemy player attacks

The pets, once unlocked, can be leveled up to increase the effects of their special abilities and they can be activated once for 4 hours before needing some rest.

If you want to speed up the recovery of your pets, you can feed them Treats.

When it comes to using your pets, it doesn’t hurt to strategize a bit. For example, I always do my best to have Rhino active whenever I leave the game for a longer period of time (over night, for example) in order to increase the chances of me getting to keep the money I have.

But things change with Foxy and Tiger, who must be activated as soon as you get back to the game – ideally after a longer break or whenever you have a ton of Spins available, in order to get the most out of their boosts.

You can also collect all sorts of cards in Coin Master, which are part of various in-game collections and which, once a collection is complete, give you various boosts or bonuses or even unlock pets.

You can get more cards from buying chests with coins in the game. Contrary to popular belief, the more expensive chests won’t give you rarer cards, but more cards. The rarity of your cards is influenced by the level of your village – so the more advanced you are, the better.

This is another reason why early on you should focus on buying as many buildings as possible in order to increase the level of your village and only when you reach the proverbial wall to start focusing on chests for cards.

IMPORTANT: Even though you do need the rarer cards for competing the collections, you don’t want to end up not having a very common card either.

Since you get rarer and rarer cards as your village’s level increases, you still want to open a few chests in lower level villages (at least a couple each village) in order to make sure that you do get the common cards too.

Otherwise, they will paradoxically become harder to get as the game will start throwing at you more and more rare cards in higher level villages.

There are all sorts of events that regularly take place in Coin Master, such as Raid Madness, Attack Madness and other Special events.

During these events, you generally need a lot of Spins stacked up in order to perform as many of the required thing (like Attack or Raid) as possible and rank as high up as possible in order to get the best possible rewards to advance your game even further.

If you want to be extremely useful and helpful to your friends (or many another account – whatever fits your bill) you can use a simple trick called the time lapse cheat that allows you to send more than 5 hearts each day.

It works like this: simply send all the hearts that you have for the day, then force quit the game and change the date on your phone by setting it 24 hours into the future. Launch the game again and send 5 more hearts. Rinse and repeat.

Keep an eye on your target

When it comes to raiding, you will get more resources from players that have more money – it’s as simple as that.

Therefore, you should always keep an eye on the top of the screen and see what Raid target the game has assigned to you. Whenever you have a whale sitting on a ton of coins, increase your number of spins to maximum in order to increase the amount of money you get.

If you have a chance to do so, when you meet such a “whale” it’s even better if you have Foxy equipped, as that extra shovel will help a ton!

This would be all that we have for you today in terms of Coin Master tips and tricks. Do you have any useful advice to add to our guide? If so, don’t hesitate to let us all know by sharing your comments below!