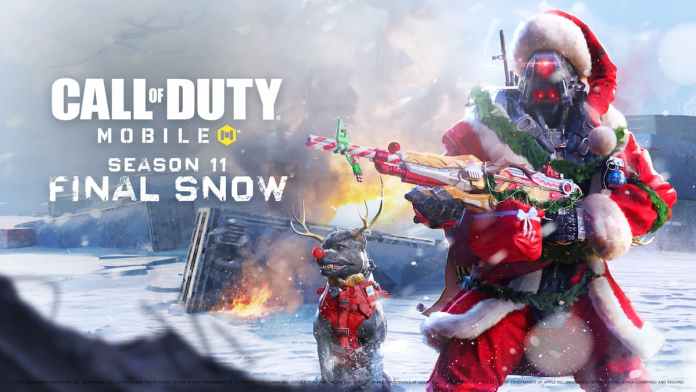 The winter festive season is almost here, and Activision is gearing up for the biggest COD Mobile Season 11 update called Final snow. What sets this Call of Duty: Mobile patch apart from the previous ones is the hefty content that it has to offer.

Before diving into the complete details, it’s worth noting that COD Mobile Season 11 Final Snow will go live on December 16 at 4 PM PT. Thus, Call of Duty enthusiasts must ensure that they update the game to the latest version as soon as it rolls out.

The winter season is in full swing, as three wintry Multiplayer maps join the rotation in Season 11, including the new Icebreaker map and the return of Holiday Raid and Nuketown Russia.

First seen in Call of Duty®: Black Ops 4, Icebreaker centers battle in and around a long-lost nuclear submarine stranded in the Arctic. Tough it out in the frigid air of this medium-sized map, or try your luck on the sub’s icy decks where combat ensues at every turn. And when the fighting gets hectic, dive into the water to make a detour and flank the enemy threat.

No holiday is complete without the arrival of Holiday Raid. Tread the estate’s snowy grounds and bask in the spirit of giving as you pummel your enemies to the ground.

Nuketown Russia returns for the holidays, blanketing everyone’s favorite chaotic map in a layer of blissful snow. Need a refresher for the change of location? Revisit last year’s Mobile Snapshot: Nuketown Russia article for tips to help you top the scoreboard in cheerful holiday fashion.

Purchase the Battle Pass for the chance to earn all of the content available in the Final Snow stream.

Blackout is coming to Undead Siege in Season 11, adding a major new environment to the mode. You’d better prepare for a big fight, too, as Richtofen has some new gear in store for the most dedicated slayers, such as Dark Matter Weapon Blueprints and the Aether Crystal completionist camo!

These are the rules of the forthcoming Ho-Ho-Hot Drops themed event:

Call of Duty: Mobile is getting in on the holiday festivities with its own huge discounts on Operators and gear through daily special sales. Beginning December 14 — just before the start of Season 11 — spread some holiday cheer with discounts on following items:

Note: Each discount is available for only 72 hours after going live in the Store. Get a discount on the Ghost Loose Ends Bundle, the Holiday Draw Redux, and many more.

New Seasonal Challenges bring a host of challenging tasks to complete in exchange for major rewards like new Weapon Blueprints, Weapon XP, the Special Ops 4 – Firefrost Operator Skin, and an assortment of cosmetic items to close out the year in style.

Later in the season, complete the Disc of Doom challenge to earn the deadly D13 Sector, a new Launcher that’s a truly unique weapon, firing razor sharp discs that bounce off walls and into enemies. It’s best used in narrow combat environments for devastating results. You’ll also have the chance to earn an Epic ASM10 Weapon Blueprint and more.

The Season 11 Draws offer a healthy mix of Mythic Operators, Legendary Weapon Blueprints, and more. Here are few of them:

So that’s everything you need to know about Call of Duty: Mobile Season 11 Final Snow. Stay tuned with us for the latest COD Mobile news and updates!