Can you go the distance? Club Penguin’s tallest mountain is waiting for you! Club Penguin Sled Racer is an endless runner that lets you take on steep slopes in a fast-paced, high-octane downhill race! We’ll help you get far with and dodge all of those treacherous mountain obstacles our Club Penguin Sled Racer cheats, tips and tricks strategy guide. Are you ready to beat your high score?

Tap both turn sides to jump!

I’m not sure if the game bugged out or something, but I was never informed how to jump manually. Right after the game showed me how to turn, it started right away and I was trying really hard to dodge those logs by turning. It wasn’t working out, then I found out on accident that you can jump manually! Do it by tapping both sides of the screen. This small jump is useful for clearing the aforementioned logs and jumping right when you go off a ramp gives you an extra boost.

Hit the ice boosts to go fast and become unstoppable!

Whenever you hit an ice boost, you’ll notice that you’re engulfed with a light blue aura. For as long as that aura is around your penguin, you are completely invincible and you’ll phase right through obstacles! Take advantage of this by hitting as many ice boosts as you can, and if you come up to a dangerous section, just power on through.

Speed off those ramps to clear big sections!

There will be occasional ramps littered throughout you path. If you hit these ramps at a fast speed, you’ll zoom into the air and fly over a ton of things! This can be useful for clearing potentially hazardous sections of the path, so be sure to maintain good speed and remember to jump at the last moment when you go off the ramps.

Here’s a rundown on all the obstacles you’ll face!

The most common obstacles you’ll see on your run. They’re rocks! Simple, ordinary, immobile rocks. Just slide around them and you’ll be fine. Be careful though, as sometimes they like to come right after one another on the opposite side of the previous one, so you’ll need to do some sliding back and forth.

These peculiar cacti are in a strange place, aren’t they? Regardless, they’re pretty easy to avoid. They always show up right in the middle of the path and they don’t move at all (Well, they are cacti), so just swerve around them for an easy dodge. 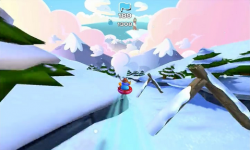 Be careful of these! You’ll usually see these in a pack of at least two, while I’ve seen a group of six of them before. These deadly contraptions take up a lot of vertical space, so these might conk you when you’re coming down from a good jump if you’re not careful. Always be on the look out for these and slide around them.

These goofy yellow mole things don’t seem particularly dangerous, but watch out; they’ve got pretty sharp teeth! You won’t see these guys initially; they wait until you’re close to them to pop out. Always be on the move and don’t stay still once you see the first one come out, as sometimes they’ll pop out right in front of you!

That’s about it. Sled Racer is all about your own control, so keep practicing and have fun! If you have any other suggestions or questions, leave us a comment below. Until next time!