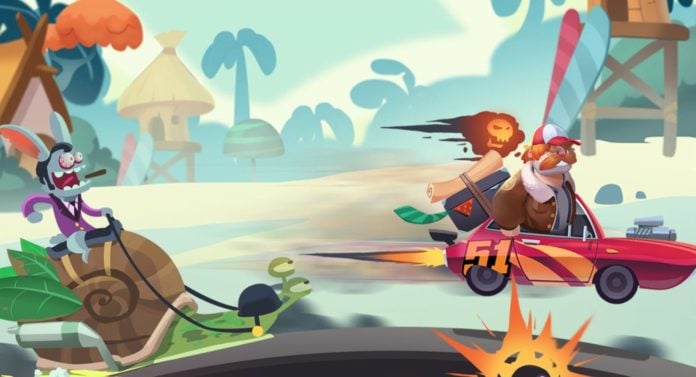 Clicker Racing is a beautiful idle clicker game with zany cars and characters. We love playing this game here at Touch Tap Play and we’re here to help you get the most out of it by sharing some Clicker Racing cheats and tips to keep you going farther and faster.

The concept of the game is very simple and we’ve seen it everywhere already: buy upgrades, tap the screen, race against crazy bosses and progress through the stages. Everything looks spectacular with brilliant, crisp visuals so if you enjoy this type of games, you’ll surely love Clicker Racing too.

So let’s not waste any time and let’s see how to perform better by checking out our Clicker Racing cheats: tips and strategies below!

The generators are extremely important
In this type of games, it’s usually your taps that matter the most and that’s what you usually focus your upgrades on. However, in Clicker Racing things are a bit different and you really get a lot of power from your Generators (the idle “workers”) and if you focus on upgrading them, you’ll have to do minimal tapping in order to keep going through the stages.

The Generators have milestone upgrades that unlock special bonuses when you reach a specific level: 25, 50, 100 and so on. It’s really useful to focus on getting to these milestones first, even for the earlier Generators that you unlock as their bonuses to add up and matter a lot in the long run.

My recommendation is to unlock all the Generators in the Tier one, then focus on getting the first three to at least 50. Move forward to Tier 2, level those up slowly, but never forget about the milestones as they really make a difference!

Remember: The speed boost you get from the tapping is based on the speed generated by your Generators, so the higher that is, the bigger your bonuses when tapping.

You car upgrades
Car upgrades become important later on in the game as you need to reach car level 400 in order to Prestige (more about this later). But until you get there, not only that you get huge boosts to your taps, but also unlock various extra powers, the most useful being “Gold Rain” which gives you gold as you tap.

So after getting to a decent spot in the race, start working on your upgrades for the car and get it to level 200 to make earning money a lot easier.

Normally, if you do everything right, you will only have to tap the screen when battling bosses in order to keep on going through the stages. There are walls in the game, but there’s nothing a solid break away from the game can’t solve.

Buy cards
The game rewards you with a bunch of free gems and you should use them all to buy cards in the game. Instead of getting a couple and leveling them up, I believe it’s best to buy as many cards as possible.

These cards offer all sorts of advantages, but are permanent, meaning that they stay with you even after you Prestige. So don’t hesitate to get as many as you can afford.

When to Prestige
As soon as you hit car level 400, you can unlock the Prestige upgrade, which basically resets the game and sees you start over, but with the added bonus from Milks and the tools you buy with it.

My recommendation is to reset your progress for the first time as soon as you hit level 400, then reset constantly when you at least double the amount of Milk that you receive from doing so.

These would be our tips and tricks for fellow Clicker Racing players. If you have other bits of advice, don’t hesitate to let us know by sharing your comments below.