Home Guides Clicker of the Dead Cheats: Tips & Strategy Guide to Build the... 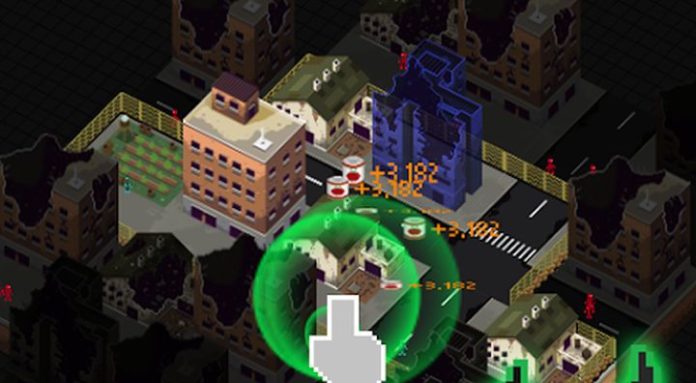 Clicker of the Dead is an incredibly addictive and extremely well done idle clicker for mobile. With a post-apocalyptic flavor, this game is certainly here to keep you busy for a long while thanks to its high quality and constant events that make things even better.

And we’re here to help you get the most out of it by sharing a bunch of Clicker of the Dead cheats and tips in today’s strategy guide. We’re going to teach you everything about the game and hopefully give you a tip or two that will help you progress faster and perform better in the game.

So let’s not waste any time and instead let’s check out some Clicker of the Dead tips and tricks below to build the ultimate camp for survivors of the apocalypse!

Upgrade your survivors
It is extremely important to keep your survivors updgrated to maximum levels, so that they keep producing goods for you. The easiest way to get materials for new buildings is from survivors, so you should definitely upgrade those first. 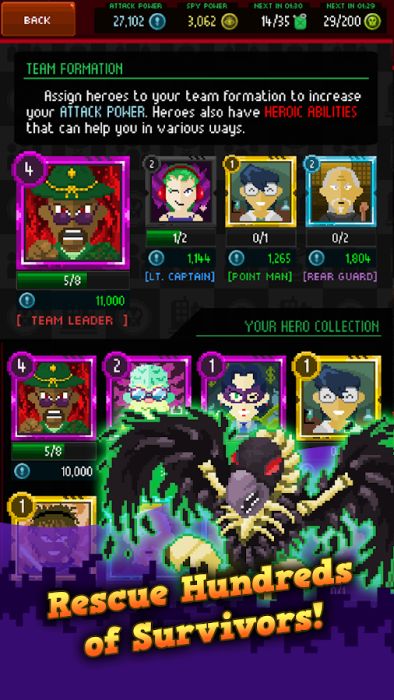 You don’t really have control over the survivors that you get as they’re randomly rewarded based on the radios you have, but the golden rule of thumb is to have a mixture of rare and common ones. Always start by getting the rarer ones first after each reset since they give the most in return, but unlock more and more for added goodies.

Focus on upgrading the survivors giving you materials, as well as Guardians for attack power – the ones that are specialized on food are not that useful in the long run.

Get those buildings up and running
You’re really building a strong colony with varied and smartly placed buildings. Have in mind that the buildings get more and more expensive as you progress through the game – and the same goes for unlocking new slots, so it doesn’t hurt to plan ahead.

My original mistake was to build lots of low level buildings, hoping that I would compensate for not leveling them up, but that’s a poor strategy in the long run. Build no more than two of each buildings at first, in the order they are listed in the menu and only afterwards build more if they are needed.

When it comes to upgrading them, don’t go for too many Headquarters upgrades early on and not until you are close to reaching the levels listed there.

Successfully complete missions
Missions are extremely important, because they not only reward you with base materials, but also with radios, tech research materials and loot items that boost the production of your survivors and which carry over after each reset.

So don’t hesitate to do everything you can to increase your chances to complete these missions, like watching ads and maxing out the levels of your survivors. But even if the chances are very low, you should still start those missions if none other are available because you never know when you successfully complete one with 20% chances of success…

Get tech upgrades
Put those materials that you earn from completing missions to good use and buy new tech upgrades in order to make your life easier in the game. There are five different areas in which to spend your earned materials and a tree that branches out like crazy, so you’ll have a lot of work to do.

Fortunately, these upgrades carry over after resets, so you can get them eventually. Just plan a little bit for each category and decide which of the upgrades to get first as some are definitely better than the others. 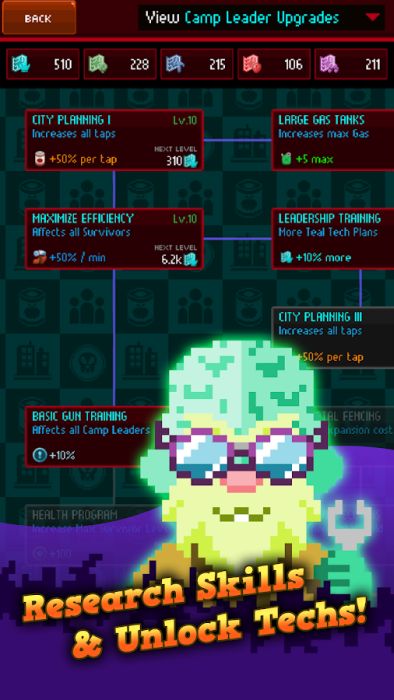 Set up your team formation
Eventually, you will get more heroes than you can assign in your team and each hero offers different bonuses. The good news is that you can use four heroes in a team and their bonuses will add up. The leader doesn’t seem to influence the game in any way, so it doesn’t matter which hero is set as the leader and which one is the Captain, Front Man or Rear Guard. Just make sure that you have the best ones in the team!

Go fight other players
PvP is really fun and extremely easy up to a point each season, so make sure that you take part in as many fights as possible and that you rank as high as possible each season in order to get awesome rewards.

Usually, when fighting against weak players, you should only Attack in order to minimize the usage of action points, but when things get more difficult, you can also try to Cripple them. The good news is that the opponents are not reset unless you refresh the list and all the effects you cause to them, including damage, are remembered indefinitely. So even if you run out of energy before a fight is over, you still can return later to finish the job.

In order to increase your chances of defeating your opponents, you should increase your attack power by leveling up your survivors (Guardians being the best), choosing better Heroes or investing in appropriate inventions (more on this below)

Add friends and collect points
You earn 100 Friendship points every six hours no matter what, but you can increase that amount by 10 for each friend that you have in the game. You can only add these by using their friend codes, so feel free to share them and use the ones shared in the comment section below in order to max out your gains.

Usually, I consider it a good time to start a new colony when the missions for tech upgrades become more and more difficult to complete. That is usually a sign that it’s time to start over and bring in some inventions into play. Another good indicator is the end of an event: if you reset right after the event ends, you get the chance to start fresh and be strong when the new one kicks off.

Just make sure that you get a satisfactory amount of Chemical X when you rest and everything should be fine!

Use your radios with the reset in mind
When you reset the game and start a new colony, it’s good to have a bunch of radios saved up in order to give yourself a head start when it comes to recruiting survivors. Try to keep some rare or even rarer radios for even better survivors and for making it a lot easier for you when you start over.

In-game inventions
After each reset, you earn Chemical X materials which can be invested in buying inventions. These give you nice boosts and some are extremely useful. I would recommend to always start with the following three inventions in order to maximize your power and overall performance:

1. Solar Power Generator (which increases materials per minute, which is perfect for building up your base fast)
2. Titanium Safehouse or Undead Landfill (which increase your storage)
3. Chemical X Bomb which increases your Guardian’s power – but any power-increasing invention is welcome here, although you get the most out of this one, per survivor.

Afterwards, you can mix and match based on your gameplay, with a focus on resource-generating inventions and power boosts.

These would be our tips and tricks for Clicker of the Dead. Do you have other advice to share with fellow players? Let us know by commenting below!