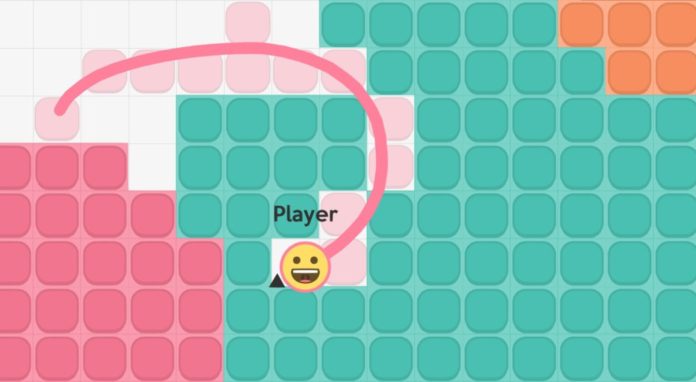 Ketchapp has decided to join the .io craze with Clash.io – a game that’s all about capturing as much as possible of the game’s map. Although the mechanics are by no means new and we’ve played similar games in the past, Ketchapp’s take is refreshing and fun. But you can always do better – and that’s the reason why we’re here to share with you some Clash.io cheats and tips: a complete strategy guide to help you dominate each game you play.

There are some mechanics that we haven’t seen in other games and things that make your life easier (or longer) when you play, and we’ll talk about them all here. Apart from that though, being successful in the game is a matter of luck and practice and we can’t really help with that. But for everything else, check out some Clash.io tips and tricks below!

1. Take it slow
I know that there’s a huge desire to capture a huge amount of squares in one go, but the risks are higher if you do so. Taking it slow ans steady wins the race and helps you stay alive for longer. So capture smaller bits and always be aware of the opponents nearby to reduce the chances of them popping you up open like a can of tuna. Or sardines.

That’s why it’s better to play it safe and be the one who takes advantage of an enemy who gets overconfident or risks more than they should… or maybe you get an invincibility boost and you can go hunting. It always pays to be patient!

3. Invincibility boosts
The glowing starts floating randomly on the game map are extremely important. These are the ones worth taking a bit of risks for because if you manage to collect one you not only become invincible, but also move a bit faster. So it’s always important to be the one who gets them, not your opponent(s). And once you do – put them to good use and clean up the enemies around you.

4. Control the corners
When new players are brought into the game, they will spawn in empty areas. That’s why it’s important to try and move towards the corners of the map and conquer one first – then expand from there. New players won’t appear in the area, making it easier for you to hold onto them, while the ones coming from the sides will have a tougher time conquering your zone. It’s the best possible strategy for constant expansion and map control.

5. Unlock Skills
In the main menu, you can see a set of upgrades that are available to be unlocked. Try to play each game focusing on unlocking them, one at a time. The easiest to unlock is the one that requires you to eliminate 15 enemies in one round. It’s not easy, but it’s worth focusing on that since it gives you 2 seconds more for the invincibility boost.

This would be it in terms of Clash.io tips and tricks. Do you have other suggestions for fellow players? Let us know by commenting below!