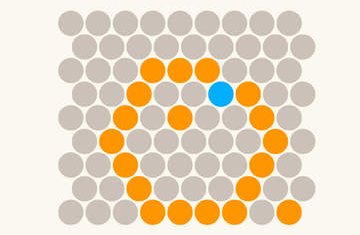 Circle the Dot is a very simple game in concept, but one that proves to be really difficult when it comes to actually winning it. I am here to help you a little bit with some Circle the Dot cheats and tips, actually strategy advice that will improve your chances of winning the game. It’s a bit of strategy and a lot of luck, but eventually you will be able to win more often than losing, so check out below our Circle the Dot tips and tricks to make the transition smooth and easy. And have fun!

1. Always the shortest route
The blue dot will always take the shortest route to the margin, so anticipate the direction and try to block the margins. It’s easier to leave the route open and work around it until the dot gets close, and when it does: bam! You block the escape and work on getting it circled. In most cases it’s more difficult than it sounds, but if you keep trying, you will make it eventually.

2. Don’t block the direct route
At least not too soon. It’s easy to anticipate the next move of the dot (maybe even the next few ones), so knowing that, make sure you build up orange dots around it and don’t block the direct route, because the dot will find a new one. If you haven’t worked at blocking it in advance, it will be very difficult to do so. So let it go clear, thinking that it can escape and just when it’s about to win, close it down!

3. Luck is a major factor
Every time you start a new game, you will start with a new board where the orange dots are already placed – their initial placement is extremely important for the overall run of the game. Sometimes, it’s just not meant to happen. On other occasions, the orange dots are placed in such a way that they will actually help you, so you will get a better shot at winning. So try over and over again until you manage to do it.

Below you can check out a gameplay video of myself playing Circle the Dot and eventually winning:

In the end, I managed to win a game in 16 moves only, so it’s doable, maybe with even fewer moves. Plan ahead, use the tips that I shared with you here and keep on playing until you get it right!
Advertisement