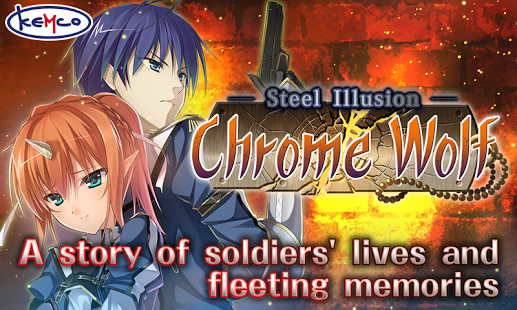 There are times when games are more than what they may seem at first glance, offering some unique mechanics hidden underneath a very common premise or graphical looks. There are other times, though, when a game is exactly what it looks like, without any sort of true depth hidden away. Chrome Wolf, one of the latest role playing games released by Kemco, belongs to those games that do exactly what you would expect them to do.

Chrome Wolf plays like an old school 16-bit role playing game, with all the good and bad that comes with it. This is not to say that the game doesn’t have anything different from the competition, as I have found the setting to be somewhat interesting, despite not being developed as nicely as I had hoped.

The game is set in a dystopian fantasy world where the most common weapons aren’t swords and magic, but guns, rifles and tanks. This isn’t the first time a game did something like this ( Valkyria Chronicles soon comes to mind), but it’s probably the first time that an old school role playing game tries something like this. This unique setting allows Chrome Wolf to be familiar and surprising at the same time. Unfortunately you will not feel surprised for long.

The World War II level of technology of the game isn’t used to deliver a truly unique gameplay experience. Battles are the same old turn based affair that we have known for years, with tanks and UFOs instead of giant swords and imps, trolls and the like. The tank does offer a few different abilities but we’re still in the realm “seen that, done that before”.

The same can be said for the plot and characters. Everything is really bland and predictable, with character development being minimal. The high amount of dialogues, especially during the first hours of the game, will also put off many players looking for a pick up and play experience.

Graphics and sounds are just like the rest of the game: bland. They’re not bad by any means but it’s something that rpg fanatics have seen and heard countless other times.

Despite these issues, the game is not a total disaster as it doesn’t really have any huge flaw. It’s just bland and not exciting at all. The unique setting could have been used to create something out of ordinary but Kemco decided to play it safe. A shame and a missed opportunity without a doubt.