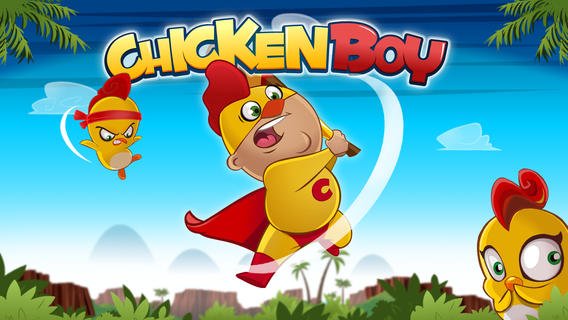 Upgrade fruits whenever possible
By far the best fruit in the game is the Banana, but that matters the least: whenever you have the chance, upgrade your fruits. The more upgrades, the better the damage and the easier it is for you to destroy monsters.

Replay the same level until you can beat it
Some levels might seem impossible, but it’s not really true. What matters the most is the combo of weapons you get at the start of the game and if they are upgraded or not. However, even if you fail a level in Chicken Boy, you still earn a nice amount of coins – keep playing that level over and over again until you have enough to upgrade weapons and you are ready to beat the level. there really is not much sense in replaying older levels (other than getting three stars on them).

Look for the power-ups
Things like the land mine and golden chicken appear randomly, but you should do your best to take advantage of them. Sometimes it’s better to focus all your attention on hitting the golden chicken as many times as possible, ignoring everything else, because the financial gain is simply amazing. Remember the level where the chicken appears and keep playing it to make a lot of money.

Hit the top creatures first
You might have mines set on the bottom or you might trigger lightning strikes. Either way, it’s best to aim for the creatures at the top. When it gets really messy and hard to take time to aim, simply aim with power shots at at 45 to 60 degrees angle and you should be fine.

The Commando Chick
Although really expensive, if you simply can’t seem to be able to get past a level, get the commando chick. It will randomly shoot at monsters coming by and is indeed a very helpful power-up. But try to remember that those coins could be better spent for upgrading your weapons!

And these would be for now our tips and tricks for Chicken Boy. Do you have other suggestions? Let us know by commenting below.