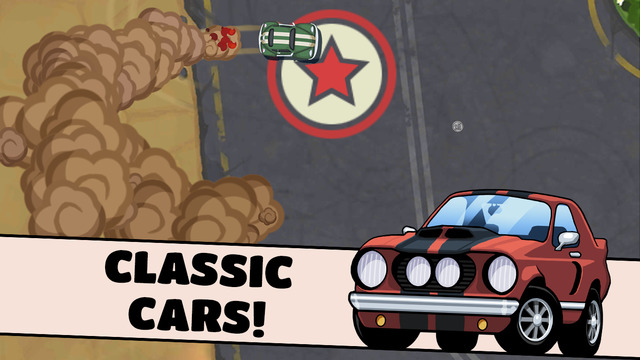 Ready to burn rubber? Checkpoint Champion is a two-touch simple racing game. Your goal is to hit all of the checkpoints, and to do it as fast as you can! We’ll help you pull off the fastest times with our Checkpoint Champion cheats, tips and tricks strategy guide.

1. Start out with the Volken Ladybird!

When you first start the game, you have to choose between the Higashi XR and the Volken Ladybird. The Higashi has lower grip but high top speed, and drifts pretty easily. The Volken Ladybird has lower top speed but higher grip. Starting out you want to stick the Ladybird; it’s relatively tight and easy to steer. The Higashi is extremely sensitive and slippery, making it more suited for expert play. If you feel you’re ready though, go ahead and start out with the Higashi. Regardless…

Whichever car you didn’t pick has to be unlocked manually, but thankfully it’s rather easy. Each car has seven different colors to choose from, and each color has a different unlock method. Both the Higashi and Ladybird have two straightforward unlock methods. For the Higashi “Black and Yellow,” all you need to do to unlock it is share a video replay or snapshot of one of your runs. Simple enough, right? For the Volken Ladybird “Pink Lady,” you need to follow Protostar on Facebook; just go to the option and select “About Protostar”. And voila!

It sounds a little daunting, but in order to get all 3 stars on the levels you will almost always need to be boosting the entire time. Boosting is done by holding down both sides of the screen. You get an extreme speed boost, and there’s no limit to how much you can use it. The fastest runs will always be utilizing the boost from checkpoint to checkpoint, so there’s a technique you should try to master. Depending on what car you’re using, boosting before your turn is complete will stop your turning and lock you going straight. You want to try to start your boosts so that your turn ends right when you’re lined up with your next checkpoint. Check out our run of Aerodrome 1-2:

It cuts off a little at the end, but you get the idea! You see how I come out of the turns and immediately start boosting towards the next checkpoint? This is what you want to try to master. It is key for getting those 3 star times, as for the run I had just barely made it with .20 seconds to spare!

4. Try out the Arenas for a lot of stars!

After a certain amount of stars, you unlock the Arena. The Arena is just like the challenges, except the layout of the checkpoints is randomized every time you attempt it. Naturally, these are a lot harder by default, but with increased rewards! They also have 3 possible stars to get, but each star is actually worth 3, which means you can get a total of 9 stars on one arena if you do well enough! They’re a great way to get a bunch of stars if you’re up to the challenge.

Checkpoint Champion is actually a pretty challenging game, so don’t fret too much if you’re having a hard time. On our first run through Aerodrome, we consistently got only 1 star on each level, just barely reaching the goal in time. With enough practice and mastering the boost turn technique listed above, it was only then we were able to shoot for 3 stars. Keep practicing and don’t give up!

We hope this guide helps you hone your driving skills. If you have any other questions or suggestions, leave a comment below!