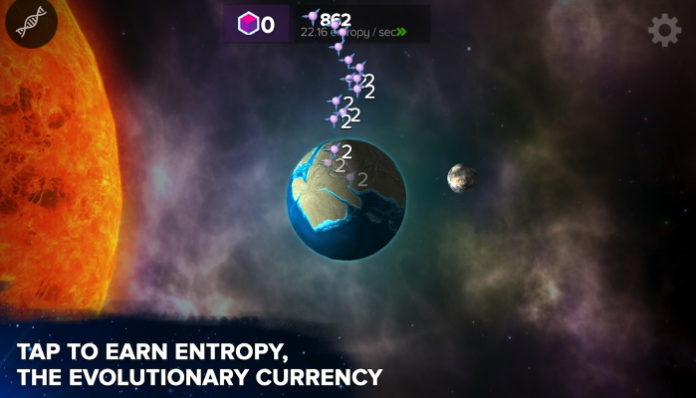 Evolution was the key to the beginning of the universe’s first instances of life, and now you get to witness it all from the very beginning. Cell to Singularity: Evolution Never Ends is an idle clicker game that lets you start from a tiny little cell and evolve all the way to human beings.

It is quite the journey to behold, and we are here with our Cell to Singularity: Evolution Never Ends tips and tricks guide to show you how to evolve fast and get the most out of each cell stage.

This app, much like most idle clicking games, requires a lot of waiting and tapping, so this is a game best played in short bursts. We will show you how to get the most out of those sessions in our Cell to Singularity cheats, tips and tricks strategy guide to evolve fast!

Tap to perform your entropy tap!

The universe’s foundation is entropy, which is also the primary currency in Cell to Singularity. You will start out with only planet Earth, and every time you tap you will generate entropy.

You will need to tap a bunch before you can create the primordial soup, which we all know was the basis for the beginning of life.

But even afterwards, you have to keep on tapping in order to keep generating money for the upgrades. This way, you will get a massive boost to your earnings and even though in the long run your taps won’t allow you to purchase a ton of upgrades, they’re still better than nothing.

Once you unlock the primordial soup, you will be able to unlock amino acids. These are the basic building blocks for all life and the beginning of humankind. In terms of the game, amino acids are the first “life” forms you unlock.

Life automatically generates entropy over time when even when you are not actively tapping, making it important to have if you are away from the game a lot.

All lifeforms will generate entropy for you, and you can purchase multiple of the same life to increase the amount of entropy generated. On the evolution tree, all lifeforms are denoted by a circle.

Of course, these life forms evolve as you progress through the ages and soon you will unlock Dinosaurs in Cell to Singularity… then move forward to other animals and eventually humans. But it won’t be a short ride!

Purchase the upgrades to increase the efficiency of life

You may have noticed that all of the lifeforms have additional squares connected to them – these are research upgrades, which is denoted by the square shape. Most research upgrades will improve the efficiency of a nearby life form, usually the one they are attached to.

These upgrades will drastically improve the amount of entropy generated by your life. It also helps to have a bunch of the same type of life.

For example, the Volcano upgrade makes amino acids 300% more efficient. If you had a ton of amino acids, you would be making bank over time.

You don’t have to keep an eye on the skill tree – which gets pretty confusing eventually, in order to purchase the upgrades. Simply get them from the game’s menu at the bottom, one at a time.

How to optimize investing in upgrades

The life upgrades give you massive bonuses, but soon they become really expensive and you should always look at the amount of income per second you’re getting for entropy spent.

For example, let’s take the first “life form” available – the Amino Acid, which will become obsolete very fast. Each upgrade only produces 2.4 entropy per second (after investing in many boosts). And upgrading from level 50 to level 51 costs 16,255 entropy.

On the other hand, one Tetrapod produces 108,765 when you unlock it (so without boosts), but costs a whooping 84.48 million to level up.

These numbers always go up and very soon, the lower life forms will not be worth investing in too much (unless you want to unlock achievements or better upgrades in the skill tree).

So my recommendation would be to get them all to level 25, then start working from top to bottom, as usually the latest life form that you have unlocked will produce the most money aka entropy.

Some will boost your entropy tap by a flat amount, or by a percentage which grants 1% of your idle entropy per/sec towards your taps.

These upgrades come in naturally and unlock as you progress through the game, evolving life and buying the various upgrades.

There is one research upgrade you should not miss, and it is the Cytoplasm upgrade. It is connected to the left of the Eukaryotic Cell, the next life after the Prokaryotic Cell.

Purchasing the Cytoplasm upgrade unlocks the daily reward panel, which enables you to collect daily login rewards. Get this as soon as possible to ensure you do not miss out on any daily rewards.

We have noticed that the best place to do is in one the planet screen, where you see just the planets rotating around. Trying to do this on the evolution tree is kind of difficult since you have so little free space.

There are in-game achievements that can reward you with goodies. The game does not reveal any of the achievements, but you will find some on your own by simply progressing through the game.

Whenever an achievement is unlocked, you must manually claim your reward by tapping on the appropriate achievement.

When an achievement is grayed out, that means you have unlocked it but you have not collected the reward yet. Be sure to collect the rewards as soon as possible, as they are hefty amounts of entropy.

Some example achievements include reaching 25, then 50, 100 and so forth with any of the life forms. There are also achievements for progressing down the main evolution route.

Get income boosts through ads

You can’t have an idle tapping game without all sorts of boosts you can get from watching ads. So make sure to take advantage of them.

The most useful is the ad that allows you to double your offline earnings (especially if you’ve been away for a couple of hours), but other in-game ads like the falling star and other boosts will give you either instant rewards, or some longer terms ones like increased earnings for a period of time.

That’s all you need to know for Cell to Singularity: Evolution Never Ends! With that, you should be able to evolve fast and get lots of entropy. If you have any other tips that you think are helpful, let us know in the comments below!

There are also more advanced mechanics in the game – like the ones that you get to after unlocking Dinosaurs and the actual restarting of the simulation – but we’ll talk about these in future articles, so stay tuned!