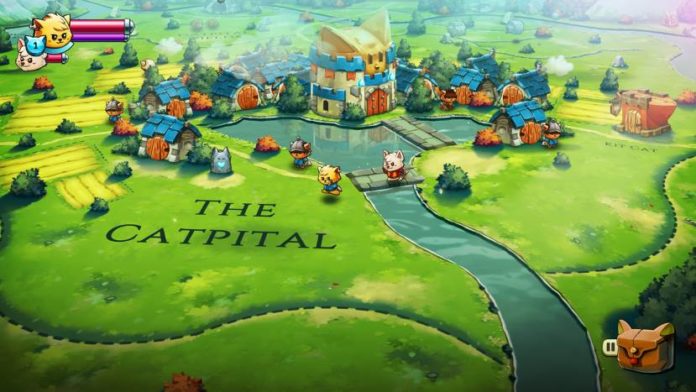 The world of Felingard is in peril once again, and it is up to two kings to put aside their difference and save their kingdom from a continuing war! Cat Quest II is the sequel to the indie hit. This time around, the cat king is joined by the dog king and a more refined battle system.

The number one rule of Cat Quest II: do not stand still wailing on enemies! As you learn in the tutorial, enemies generally attack in the same fashion of hitting everything around them. You simply need to move out of the way to avoid damage, so try not to take any unnecessary damage.

Remember: the dodge roll is your friend! Quickly double tap anywhere on the screen to have your king roll in that direction. You can do it in rapid succession, making it an extremely useful tool for evading attacks and getting out of harm’s way.

If one of your kings does end up going down, do not panic! You can revive them by standing near them for a few seconds. Make sure the coast is clear before you attempt this though, because if you get pushed out of the circle you need to re-enter it for the revive gauge to continue filling.

Do not forget about your magic spells! You gain access to a variety of offensive spells over the course of the game, and they can help put on the pressure on your enemies. You restore mana as you attack enemies with regular attacks, so do not hold back with the magic!

The cat king and dog king both have three main stats to keep track of: attack power, magic power, and defense. Attack power determines the strength of your melee attacks, while magic power improves the power of your magic spells and staff attacks. Defense reduces the amount of damage you take from attacks.

Your kings’ stats will naturally improve as they level up, but you can further boost their stats by equipping them with gear. You have a head slot, a body slot, and a weapon slot. It is up to you to boost their stats however you like, as both kings have the same stats, so you can have them be balanced, or have one of them be specialized in some way.

You can find loot in dungeons, and you can have them upgraded once you get to Kit Cat. Alternatively, you may find duplicate pieces of gear inside dungeons; your gear is automatically upgraded on the spot if you receive another piece of gear that you already have.

Have a fighter and a mage!

Since you have gear that can boost attack power and magic power, it helps to designate one of your kings to a type of damage. For us, the cat king was our mage – he had all of the magic boosting items equipped plus he wielded a staff, making his mana regenerate very fast.

By the way, if you did not notice, equipping a staff on one of your kings will cut their maximum health in half. The trade-off to this is that the staff’s attacks are projectiles, meaning you will be away from enemies most of the time so you do not have to worry about getting attacked as often as you would in melee range.

Whoever you do not have as your mage, they will become your fighter. Load them up with attack boosting gear (some defense boosting gear if you like being a little more safe), and watch them chop down enemies with relative ease.

You can play as whichever king you like, but there will be times where you should…

If you are playing the game solo, the AI will take control of the king you are not currently playing as. Whenever you attack an enemy, the AI king will begin to periodically attack the same target as you.

The AI king will fight in bursts and you do not have to worry about them dying, as they are completely invincible. To balance this, the AI king does not attack as often, meaning that you could miss out on a lot of damage.

Remember that certain enemies are more susceptible to certain types of damage. The flying rock enemies that you meet early on are highly resistant to physical damage but crumble to pieces against magic damage, so you want to switch to your mage king to fight them efficiently. If you leave them to your AI king, it might take a while due to how infrequent their attacks are.

When you switch kings, they will swap on the spot for your current king. Be warned that they will have as much health as you left them last time, so if you emergency-swapped a king out when they were about to fall, swapping them back in at a bad moment could prove fatal, so keep an eye on your health bars.

Cat Quest II is an expansive game, and often times you will come across dungeons off the beaten path. When you approach a dungeon, you will see the general level of the enemies inside, so take caution if you are underleveled.

If you see a dungeon that you are sufficiently leveled for, go ahead and delve into it – you never know what you will find! Often times there are some good pieces of loot hidden within the dungeons, so take your time and explore all possible paths. When you get the “Dungeon Complete!” notification, you have beaten all enemies and opened all chests, so you can leave safely knowing you have collected everything.

Use elements for tough enemies!

There is an elemental system in Cat Quest II, and the first instance of this are your two starting spells. You get the basic fire and fire spells early on, and you can hit certain enemies for extra damage.

Complete side quests for bonus goodies!

Sometimes it pays off to revisit earlier areas – you may come across a townsperson in need. If they have an exclamation mark over their heads, they have a side quest for you!

Completing side quests are not essential to finishing the main story, but taking the time to do them rewards you with a hefty amount of experience points and maybe even some rare gear! If you are looking to upgrade your kings, doing side quests should be your priority!

Remember that if you go into your inventory while you are in the overworld, you can see a zoomed out map of Felingard. You can scroll around and locate side quests indicated the exclamation marks.

And that is our guide on the combat of Cat Quest II! Use the right spells often, stay mobile, equip the latest gear, use both kings, and you should be fine! If you have any other tips or tricks to share, let us know in the comments below!