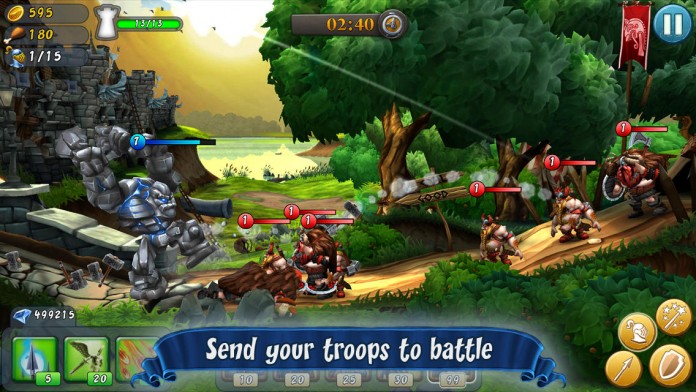 CastleStorm, developed by Zen Studios, has been originally released on Sony PlayStation Vita a while back. The game has managed to become so successful that the team decided to released a mobile port of the game, which includes some new features and balance changes. Despite these changes, the game is still as fun as it used to be on Sony’s console, featuring a gameplay experience which combines elements taken from several different genres like tower defense, strategy, shooting and more.

Needless to say, the Ballista is probably the most important gameplay element of CastleStorm. Mastering the use of this weapon will allow you to shoot both quickly and accurately. This is really important since some of the missions come with time limits. Don’t be afraid in practicing a little during easier missions, you’ll be glad you did when the game starts throwing thougher challenges at you.

CastleStorm features several power ups that will be quite helpful during the game. In order to avoid making things too easy, the game will avoid you from using specific power ups from time to time. For this reason, it’s always better to see what’s in the next stage before making a purchase so to avoid getting something that cannot be used in the next stage.

Summoning the powerful Ser Gareth must always be considered as a final resource when things are really desperate since he’s only going to be available for a limited time and can only be summoned once per stage. The fact that you can control him makes it a really valuable resource that can turn the tide if used properly.

Using boosters must be done only when strictly necessary, just like for Ser Gareth. This is due to the fact that boosters can only be purchased with real money. Only use them when you really have no idea on how to proceed.