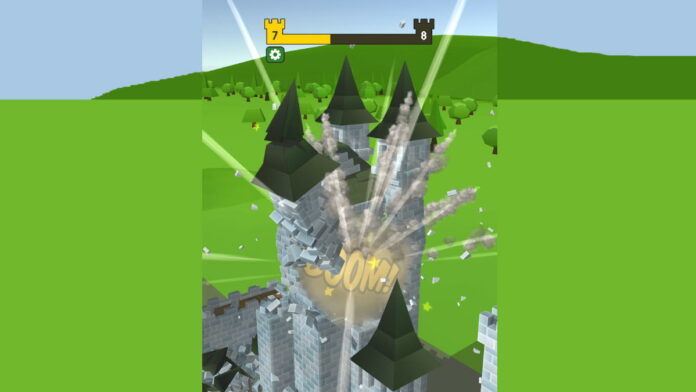 Welcome to Castle Wreck, where the main objective is to… WRECK! There are kingdoms scattered throughout the land, and the only way to conquer them is to siege their castles with heavy artillery! Load the cannons, lock on, and destroy all the buildings!

Castle Wreck is a pretty straightforward game, but we’ve got a few tips here for you if you’re looking to up your wrecking game. Here is our Castle Wreck tips to demolish all buildings!

Castle Wreck is all about being efficient with your cannonballs. You need to destroy enough of the castle in order to pass the level, and if you do it without using too many cannonballs you can earn three stars on the level.

When deciding on a spot to shoot, try to target areas where the castle is not structurally sound. What that means is that you want to aim for the base point of towers where the walls are thin and crumble easy, or parts of the wall that don’t have too much support.

Always aim for the bottom of castles, as knocking out the foundation is an easy way to cause a chain reaction. Hitting the bottom of a tower will make it topple over and probably crush another part of the castle on the way down!

Something to keep in mind is that the little soldiers stationed on the castle don’t count towards your destruction progress, so you don’t have to aim for them specifically.

Aim for the TNT

Often times there will be TNT blocks littered around the castle. This seems like a very dangerous oversight… but you know what, it makes our jobs easier, so let’s just roll with it!

If a TNT block is hit hard enough, it will explode and severely damage all objects around it. These things are usually placed in spots where they can do some nice damage to the castle, so make sure to aim for them if you see them.

However, if you do land a direct hit on a TNT, the shot will become a perfect shot and it’ll be fiery in appearance. These shots pack a lot more punch and they will destroy more bricks!

You’ll eventually come across castles that have enclosed or boxed off spaces in them. While they look like they’d be reinforced and hard to take down, these spaces are often hollow inside, making them a tasty target.

Even better is that the game loves to hide TNT blocks inside these little compartment to try to fool you. If you take aim right in the center of an enclosed space, there’s a pretty good chance that you’ll hit the TNT inside and cause a massive explosion of bricks.

Take Advantage of your Power Ups

You have three power ups that you can activate to turn your shots into mini nukes! Here we will go over all of them and when the best time to use them is.

The blue cannonball summons a thunderstorm and engulfs your cannonball in a blue flame. This power up is straight forward as all it does is essentially increase the blast radius of your cannonball. Aim for the center of a structure to do some big damage with this!

The pink power up turns your cannon into a temporary laser cannon. Your cannon will fire a concentrated ray of energy at your targeting reticle for a few seconds, vaporizing anything that dare stands in its way.

If you’re looking to destroy a specific, chunky part of the castle or pierce through multiple sections, the laser cannon is the way to go – otherwise, it’s not very good at covering a wide area.

The final orange power up lets you aim with precision accuracy. Once activated, this power up lets you tap wherever you want to shoot, up to three shots. If you’re having trouble hitting a specific TNT block or part of the castle, this is a great power up to use.

Wait for the Frame Rate to Recover

These castles are made out of a TON of bricks, and thus destroying a large chunk will often times slow your game down. The game’s frame rate will continue to slow down so as long as there are bricks moving.

Got any other castle destroying tips or tricks? Share with us your favorite strategies in the comments below!