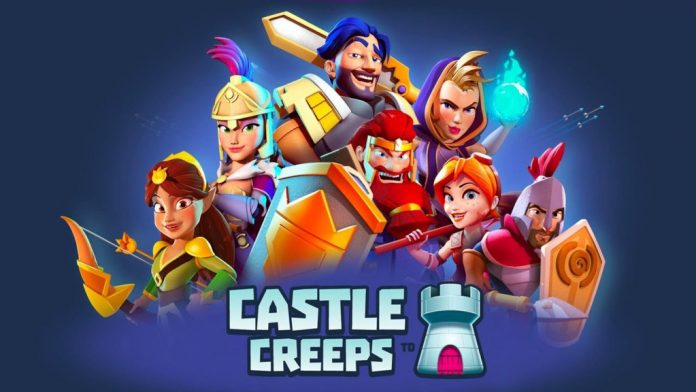 A new tower defense game has made its way to the App Store and Google Play store, Castle Creeps TD. A beautiful game that pits you against invading Orc hordes, Castle Creeps gives us the best that a game in this genre can. But it’s also really challenging! And to help you cruise through the missions and get the most out of the game, I have some Castle Creeps cheats and tips for you. This is a complete strategy guide that will be great for beginners especially!

From upgrading tower, to better tower positioning and everything else, it’s time to learn a bit about the game! So let’s find out how to grab those three stars in all missions by reading Touch Tap Play’s Castle Creeps tips and cheats below!

Personally, I think that you should focus on the upper levels of the towers because you will rarely have level 1 towers on your map during the later stages of the game. Therefore, it would be a waste of precious resources to focus on upgrading the stats of the 1st level. Instead, wait to pile up enough resources and upgrade your Lvl 2 towers first – get them to Rank 3 ASAP and unlock their special abilities, then work on the 3rd level and so on. Keep the Lvl 1 towers at rank 2 until you have a lot of resources to work with! This will help you progress faster through the missions and grab those 3 stars easier!

We wrote a complete guide to the Castle Creeps heroes, make sure to check it out as well if you want to know more about them!

2. Upgrade your heroes!
With heroes, things are a bit different. Even though they share the resources required for upgrading, I would just go and upgrade them as soon as something can be upgraded. So always keep an eye on those resources and as soon as the option becomes available, upgrade the Equipment of your heroes as any extra bonus is welcome!

3. How to get 3 stars in all missions
Some of the missions are difficult to master the first time you play them. Don’t panic! Just finish them with as many stars as you can and play other missions too. The thing is that as you play, you will collect more resources and maybe even unlock new heroes and you can go back and replay those missions with better stats and ace them easily.

Remember that at chapter 3 you unlock one additional hero, then a new one at chapter 6 (you have to play the first mission in each chapter in order to unlock them). So once you reach chapter 3, you can replay any previous battle, but you will now have 2 heroes instead of one, which is from the beginning a huge advantage. You will also have, most likely, much better towers, so acing the missions will be extremely easy.

In conclusion, if a mission seems impossible to 3-star at a given point, it probably is. Just let it be, play other missions, grow your heroes and towers and come back a bit later. You’ll ace it easily!

4. Be smart when using the Sentinel
The Sentinel is that huge electrical tower that has a maximum of 5 charges and deals a ton of damage or freezes Bosses. It can be a game changer in any mission, but remember that it takes a long time to recharge! So use it when you really have to: if you’re getting closer to a big boss battle level (which is at the end of a chapter usually), try to have at least 2 charges left.

However, don’t do as I did and never use it: you should always keep it at 3-4 charges and use anything above that in order to make your life easier. Just make sure to use it on large areas of enemies in missions that you want to ace or when boss fights become a bit too difficult.

– take advantage of the Infantry Towers and place them in such a way that the Dwarves stop incoming enemies where multiple towers hit them (preferably a minimum of two).
– don’t forget to change the rally point of the Infantry troops by tapping the Infantry tower and then the flag button
– Bow and Magic towers usually work great as a pair for the Infantry Tower, despite what you would normally think. The cannon should be left a bit behind because it is slow and pretty much useless against fast single units.
– don’t forget that you can sell a tower and replace it if needed. It’s not the best thing to do, but in some missions it might help.
– replay missions, knowing what types of enemies come and where they come from and adjust your tower placement accordingly

Winning all battles and mastering all levels in Castle Creeps TD is a matter of good strategy, solid constant upgrades for your towers and heroes and replaying missions. You will see that, with the correct tower placement, you can achieve a lot and master missions that might seem at one point impossible to three star. Take advantage of your heroes, use their powers at the right time and you will do great in this game!

Do you have other tips and tricks for fellow Castle Creeps players? Let us know by commenting below!