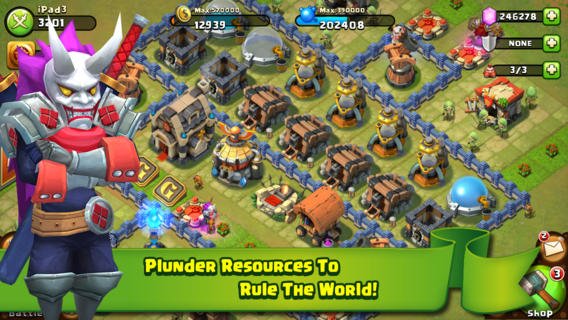 IGG’s Castle Clash is taking the iOS strategy world by storm, threatening to disrupt the supremacy of Clash of Clans. But we’re not here to talk about supremacy in the gaming world, but inside the game’s world. And in order to make that happen, we have for you a series of Castle Clash cheats: tips and tricks that will help you get better and destroy enemy base after enemy base.

So let’s get things started, there are a lot of things to consider – and hopefully this Castle Clash tips and tricks article will prove to be the only resource you need to get better.

1. Focus on upgrading resource generating buildings to the max. Although ideally you will get most of your resources through raiding, it doesn’t hurt to have a back-up and the more resources you can harvest at a time, the better.

2. Only collect resources when the mines are full. Or only if you really need them to build or upgrade something. There’s no need to have a ton of resources standing idle because that will only attract attacks. Nobody wants to waste troops for a couple hundred or thousand resources, so you’ll be safer. Plus, you will get to use your own resources, not give them to other players.

3. Keep upgrading the Town Hall. The bigger its level, the better your town will be, with more buildings and defense units and fences unlocked each time.

4. Always have troops in your Army Camp. Not only that they are used to attack enemies, but you also use them to defend your camp. Therefore, having them trained and knowing their capabilities is the key to victory. Also, always try to upgrade them whenever possible.

5. Don’t ignore the dungeons. The single player campaign, basically, is used to give you few resources, but one extremely important thing: hero shards. These can be used to recruit heroes and you should make sure that you complete the dungeons to get as many heroes as possible as soon as possible for them to build up experience with every battle (even if you lose them in battle, they still gain experience). You can also replay dungeons for increased goodies and shards and a good strategy is to do it for those dungeons where you have minimal losses.

6. Attack with all your troops. Since in Castle Clash you don’t lose all your troops after battle, you should go all in every time you attack an enemy because the more troops you deploy, the faster you will destroy the enemy’s defenses and minimize your losses.

7. Always have magic ready. In the Relic Hall you can and should purchase magic to help you in battle. A good strategy would be to upgrade the Relic Hall to level 6 as soon as possible to be able to enter the battles with two spells that can offer a huge advantage.

8. Sacrifice heroes when they’re no longer needed. Although a good strategy is that to keep your early heroes with you, in some cases they will be quite sucky so you won’t need them. Just like slime, you can sacrifice them to improve the stats of other heroes. The better the hero, the more experience you get, so it’s not that big of a loss anyway. Just make sure that you only keep the best possible heroes active and always eliminate the extra ones.

9. Don’t ignore the Arena. This is a new feature in this game and it might seem intimidating at first, but once you get the hang of it, it will be fun. Not to mention that it will also reward you with Honor Badges, which can and should be used to get new heroes and/or improve the ones you already have through sacrifice. Just make sure that you have your best heroes available, and challenge others in the arena. Also make sure you set up your defence for when others challenge you. Even if you lose, you will get Badges, which are really important.

10. Don’t get too good. Generally, the idea is that a good offense and rewards come from a bad defense. Try to lose battles in the arena and in the town in order to lower your rank and hit hard at higher level players.

These would be our tips and tricks for Castle Clash for iOS. Do you have others to share? Let us know by commenting below!