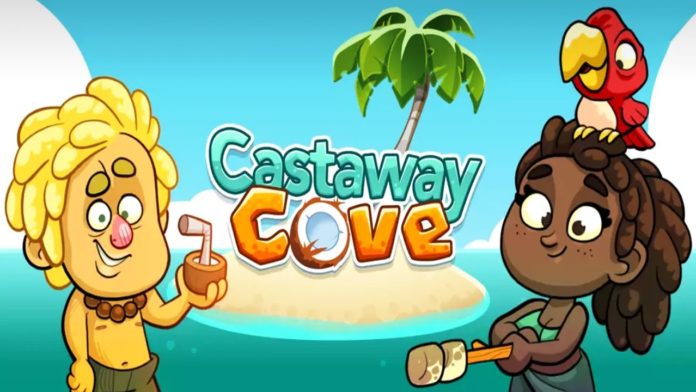 Castaway Cove is an amazing incremental game from Kongregate and we’re here to help you get the most out of it by sharing some Castaway Cove cheats and tips. These are mainly aimed for those who are just starting up on their adventure, but more advanced players might find some useful information here as well, so read on!

Castaway Cove sends you to a faraway island and puts you in charge of rescuing castaways, sending them to explore the nearby lands in order go gather resources and, in the end, build and upgrade amazing structures on the island. It’s not an easy job to do, but it surely is fun and we’re going to make it as easy as possible for you with our Castaway Cove tips and tricks!

What building to tap?
You’d think that the latest building that you have unlocked rewards you with the highest amount of Sand Dollars per tap, but that is not true. In most cases, you will get the most money from buildings that are 3 or even 4 levels behind. It’s easy to find out which gives you the best rewards: simply tap all of them once and then focus on the one offering the biggest profits.

Level up vs Upgrade
Each building in the game gives you two opportunities of upgrade: leveling them up using regular Sand Dollars and eventually ranking them up which makes them not only produce more, but also do it faster; and upgrading which requires the special resources collected from the areas you unlock in the game. Each new upgrade doubles the amount of money generated by each specific building.

Both are extremely useful, but the latter are dependent on the resources you have on hand. Upgrading the best performing buildings you have (and eventually the ones you unlock later on in the game will become your best performing ones) is a good idea for the long run. If you want quick profits during early game, focus on upgrading the earlier buildings.

Exploration and resource gathering
As you level up, you unlock new areas for your castaways to mine for resources. It’s extremely important to have two things in mind when mining for the said resources:

a) The most important part is each Castaway’s bonus. Some offer increased production when mining for a particular resource, while some offer other bonuses. Unless you really don’t need more of that resource, always place the castaways in their favorite area. For the hard to get resources, it’s better to add along some castaways that offer production bonuses to nearby workers.

b) The need for resources. If, for example, you have no castaways working on the most basic resource – wood – and go for the really difficult ones (like diamonds or better), you might not profit that much. Always have in mind the requirements to Upgrade your buildings and mine accordingly. There’s no point in having a ton of diamonds fast if you can’t put them to good use!

In the end, after the first couple resets – or even after the first one – you will have a better understanding of the resources and how they work and you will be able to plan ahead and start working on the ones you need a ton of early on.

Rush to get the Sailboat unlocked for the first time
Getting the Saillboat ready for the first expedition is a difficult task and you only get there after level 25. This basically resets the world and sees you start over, but with extra firepower – making progress a lot easier.

My recommendation is to rush for the Sailboat during the first playthrough and reset as soon as you have the chance. You’ll get a nice bonus to start with and a better understanding of the game.

Afterwards, you should reset only after you gain enough extra tokens to make it worthwhile. Don’t reset too soon because you will not see a huge spike in progress – but don’t wait for too long either. My recommendation is to reset as soon as buying new ranks for your existing buildings requires huge waiting times.

How to get more castaways
Getting more castaways is key to success and fortunately you have a bunch of options to get more without spending real life money (which is, by the way, the easiest method of getting a bunch fast):

– complete missions: some of them reward you with new castaways or give you castaway tokens to level up existing ones or eventually unlock brand new ones.
– open free chests: this is a no-brainer. Every 6 hours you get a free chest with castaway tokens. Make sure you open as many as possible each day
– spend your premium currency of castaway boxes: I found out that using 100 gems to open up a premium box is pretty lucrative. You will have a few solid hundred after the first couple of days of playing and I think it’s best to invest them all in these boxes. You do have even better boxes that guarantee Elite Castaways, but they are extremely expensive at 900 gems each – and for a while, you will get power in numbers with so many resources waiting to be collected.

These would be, for now, our Castaway Cove tips and tricks. If you have additional advice for fellow players, don’t hesitate to share it with us in the comment section below. Also let us know if you have further questions or you’d like us to focus on some of the other aspects/mechanics of the game.