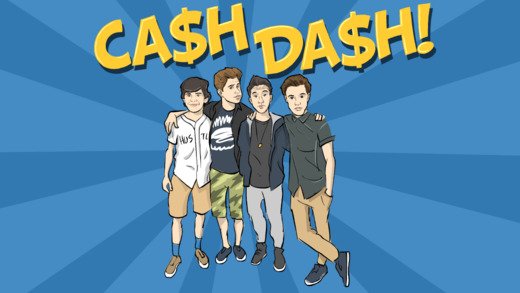 Cash Dash: Cameron, Nash, Carter, and Hayes is a new platformer game that is taking the iOS world by storm, probably because it features four extremely successful social media funny guys. It doesn’t matter why you like this app, though, it’s important that you do and that we are here to share with you a complete set of Cash Dash: Cameron, Nash, Carter, and Hayes cheats and tips (or, better said, Cash Dash tips and tricks because we don’t have to use the whole name).

There’s not much we can help with, as you probably know already if you have played the game, but we did find out some important things to note, so check them out below and have fun! Oh, yes… and we’re going to start with a quick Cash Dash gameplay video if you want to check out the first few levels of the game once again:

Now back to the Cash Dash cheats and tips!

1. You only have three minutes
It doesn’t appear that you get a bonus if you complete a level faster, but you have to do it within three minutes. You will reset the timer if you lose one life (although you should really stay away from that), and you should make sure that you collect as many items as possible, especially diamonds for higher cost gains.

3. You can destroy dirt blocks
Shooting your iPhone will destroy any dirt blocks in your way, possibly creating new access routes for you. Have this in mind when deciding the fastest route to complete a level.

4. Each character plays the same level
Even though everybody wanted, probably, just like me, to have each character with a specific power or something, Cash Dash: Cameron, Nash, Carter, and Hayes challenges us to complete each level with each of the four characters. The good thing about this is that practicing over and over again, you get better, but it doesn’t get too fun in the long run. However, if you want to complete the game, this is what you have to do.

5. What are coins used for?
This is a question that I still have so far, since I am collecting coins that I can’t spend anywhere (apparently). All the downloadable things, like the new themes, are free, so coins make little sense. However, having in mind that you can even spend real money to get coins, we’re probably going to get some sort of shop in the near future. Either way, I would suggest you download all the theme songs just to make sure that you have them all before they start costing coins.

UPDATE: We just found out that you can use 50 coins to get more lives for a character in case your 5 starting lives are not enough. However, if you go to the main menu and start over, you start with the 5 lives already, so there’s little sense in spending the money.

6. Jump on enemies or shoot them
The mechanics, just like in any platformer game, are pretty simple: if you see a bad guy (like the mummies or logs), you have to kill them either by shooting them or jumping on them. On most occasions, shooting works best, especially since you can shoot while jumping, so make sure to take them out ASAP.

Have you been able to find any Cash Dash: Cameron, Nash, Carter, and Hayes cheats out there? Or maybe you have some more advanced tips and tricks to share with us? Let us know by commenting below!