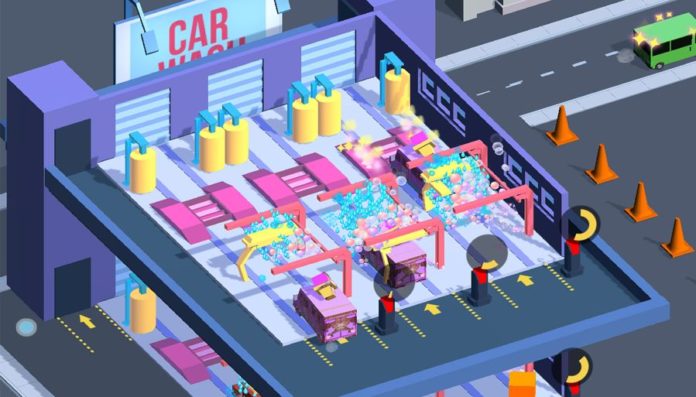 Car Wash Empire is a brand new idle game available on iOS, and one that takes casual gameplay to the extremes. And we’re here to help you make the most out of it by sharing some Car Was Empire tips and tricks in our complete guide to the game.

The truth is that if you played the game you probably believe that it’s not a lot going on in the game – especially because it starts really slow and seems to go nowhere. But the truth is that there are some (potentially hidden) features that this game has – and we’ll talk about them all.

This way, we’ll make sure not only that you will have a ton of fun playing the game, but you’ll also unlock everything it has to offer and do so ASAP.

So let’s not waste any time and instead, let’s check out some Car Wash Empire tips and cheats below!

Early on, upgrading anything is really difficult because the game is extremely slow and you don’t have enough funds. And that’s when you should focus on the Car Wash upgrades. I will tell you how they work, and list them in the order you want to upgrade them in:

Wash Speed: This is the first one you want to upgrade, because you need the cars to get out of there fast, so that you keep the profits going.

Size: Although you won’t have to constantly push for increased size, this is useful as it will actually unlock new car washers and each upgrade will increase the amount of money you make. You unlock a new car washer every few levels (look at the bar, and when it fills, it unlocks a new car washer).

Price: This will eventually even out with the Wash Speed and it’s pretty much self explanatory: the higher your level here, the more money you make for each car that you wash.

Finding a balance with the upgrades is key here. If you upgrade the Size too much, you will have empty car washers – so try to keep them busy at all times and in connection with the Driveway Upgrades that we’ll talk about below.

2. Unlock the Driveway Upgrades in the correct order

This is something you’ll have to spend your money on every now and then as well, as the Driveway upgrades help you keep the business going by influencing the amount of cars you have waiting in line, the traffic frequency (how often cars pass by) and help you unlock new cars.

In these areas, you won’t have to invest too much, but there’s one category that’s more important than the others: Traffic Frequency.

Keep upgrading this and keep an eye on your lines. For example, at the moment of writing this article, I am at level 30 and still playing in the US. I have my Traffic Frequency at level 11 and the line capacity at level 4.

Combine that with a Size of level 10, things are going smoothly, with a constant flow of cars getting washes. The lines are non-existant and the money is flowing.

What I am doing next is upgrading the Was Speed and Price in order to maximize profits (they’re both currently at level 20). Then, I will increase the Traffic Frequency and as soon as the lines start to fill up, I have two options: increase the speed further, increase the size to accommodate new cars or increase the line itself.

Always think about the options that you have and upgrade in such a way that you maximize speed, you have all your washers running and maximum profits.

3. You have a Shopping Mall and Tyre Shop to the north

You’ll probably discover these on your own eventually, but I have to say it just in case you don’t. In the upper part of the screen, there are two empty lots when you start the game and you can build there two structures that will help you make even more money:

Shopping Mall: This is the first one you get and gives you +5 dollars per vehicle that stops there. You increase the parking lot by buying new upgrades (when the bar fills up, you get an additional parking lot)

Tyre Shop: Unlocks at level 15, but gives a lot more money per car ($100 at first level). It’s slower and for a while just one car can enter, but it’s really worth it. Upgrade this one in order to fill the bar up and allow more cars to get in there.

As you make money in the game, your level’s XP bar fills up. However, in order to actually level up you have to hit the button in the upper right corner to do so. Make sure to tap it as soon as it’s available.

Not only that you will level up by doing this, but you will also receive some money for doing so.

Also, based on my own experience, after each level up, Car Wash Empire throws an ad at you. And since you have the option to watch an ad to increase your reward, I recommend doing that each time you level up – since you’re seeing the ad anyway, at least get something out of it!

5. The ads are a life saver

Even though annoying for most of the times, the ads are extremely useful, actually and can help you progress a lot faster. So make sure to take advantage of them every now and then – just like I recommended above.

Also, every now and then, you will get various icons in the upper right corner – the icons stay there for a limited amount of time only, but if you tap them, you usually get some great boosts.

The better one in my opinion is the formula car icon which increases the speed of all cars (and your car washers) by a lot for a limited period of time, giving you tons of money fast.

The other one is not as useful, as it simply sends a ton of cars your way: but if you don’t have enough queue space, it’s just a waste. Go for the instant profits instead!

6. You can still turn off the ads

If the ads really annoy you and you want to turn them off, you have two options. Before choosing the latter, do consider the fact that it’s these ads that help the game’s developer get paid for their game – and everybody should be paid for the work they do.

Remove ads IAP: You have this option in the settings menu. You can pay $2.99 to have all unrequested ads removed, but you still seem to have the other ads available (for various boosts)

Stop all ads: If you really want no ads whatsoever, force quit the game, go to your device’s settings and turn off WiFi and/or Mobile Internet. Restart the game: you can still play it, but with no ads. As a downside to this, you’re also not going to receive any potential bonuses that you would get from watching ads.

One of the biggest challenges in each area that you play in is unlocking all cars. There are three methods for unlocking new cars:

First, you can do so by purchasing Popularity upgrades in the Driveway. This only unlocks more regular cars and you have 6 in each area.

Second, go to the car shop to the left, where you can unlock Rare Cars by Paying money (or watching ads). These cars will give you more money when they get into your car washer.

We also have Epic Cars available in the shop and these have to be researched. They are cooler cars that make you even more money.

If you’re consider the game to be too slow – especially early on, my recommendation is to buy all the upgrades you can and simply close the game for a while.

Return after 30 minutes and you’ll get a decent chunk of money that you can triple by watching an ad. Do so and you’ll have enough to purchase quite a few upgrades in multiple areas and speed up the game considerably!

As soon as you reach a specific level in the game, you unlock a new area where you can play.

Each new area comes with new cars that you can unlock, but apart from that there are no actual gameplay changes whatsoever. The prices for the upgrades are higher, but that would be all. Still fun, though and you can move from one area to the other as you wish.

After unlocking a new area, you will still earn money from the previous areas, even if you are not actively playing in them. This is a really nice thing that makes everything a lot easier.

10. How to unlock new lane and more car washers?

I already wrote about this earlier, but I know that sometimes you won’t read these guides in their entirety, so I decided to mark it, as you probably wonder how to do it, especially if you just started playing.

It’s really easy: you build new Car Washers by upgrading the Size in the “Car Wash” category. You get a new one at level 5 and afterwards every few levels: just look at the bar near the “Size” category and know that you will unlock a new one when it fills up.

A similar thing goes for the lanes: in order to open a new one, you have to increase the Line Capacity in the Driveway section. You unlock the second lane when you get a line of 4 cars, for example.

These would be our guide for Car Wash Empire. If we missed anything, don’t hesitate to let us know by sharing a comment below. Do the same if you have any questions regarding the gameplay or strategies to make the most out of it.