Home Game Guides Can You Go Inside the Crashed Airship in Fortnite Chapter 3 Season... 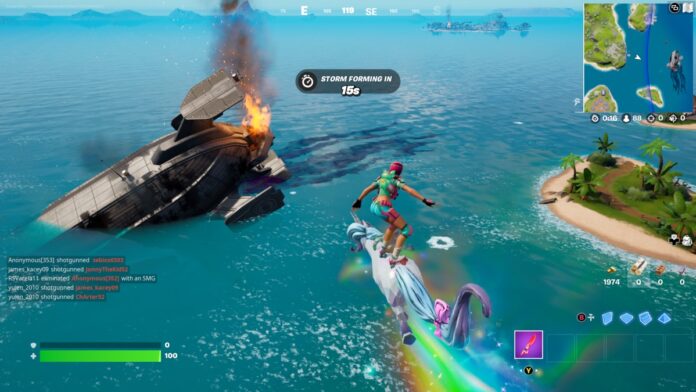 Fortnite’s 2nd season in Chapter 3 has been full of excitement, with new quests, fun battles, and fresh features like the no-build mode, sprinting and mantling. Lately there has been some drama occurring at The Daily Bugle. Players dropping at that location are invited to join the Seven to fight the IO forces, giving players extra XP for completing battle quests. Those battles are now over (although more Battle Quests are still available) and the results of it include a crashed IO Airship! Find out more below.

Can You Go Inside the Crashed IO Airship?

The airship that once flew above The Daily Bugle is now crashed into the waters east of The Daily Bugle. It is now a new location on the map, and players can go and see what is happening with the burning wreckage.

There are a couple of IO chests to open (one on top and one below in the water).

There is no power going to the airship so none of the huge fans are working, and neither are the doors. This means that, sadly, we are not able to enter the airship.

It is still a pretty cool spot to check out, and has a couple of chests to open. There is also a working siege gun to launch yourself away from the area once you are done exploring.

We will update you as soon as we know if and when anything changes with this new location in Fortnite Chapter 3 Season 2! Good luck.