Choosing the best weapon in Call of Duty Mobile is key to victory… but with 27 available weapons, sometimes it might be difficult to decide which is the best one for your character.

But this is exactly what we’re going to discuss today, in detail. We have touched the subject in the CoD Mobile tips article that we’ve published recently, but now we’re going to get a bit more in depth and share not just the best weapon in Call of Duty Mobile, but also my top 5 weapons in the game!

Now, it is worth saying that this list makes a bit more sense in the regular multiplayer modes – like Frontline, Team Deathmatch, Domination and the likes – and not the Battle Royale mode. That is a different mode where you don’t really get to choose and sometimes you’ll have to just do with less than ideal weapons.

But the traditional multiplayer is fun, intense and absolutely amazing, so these weapons will help you the most when playing it. They are also good for Battle Royale, that’s a fact, but you’re not always guaranteed that you can get your hands on one.

With these in mind, let’s check out the…

You don’t hear many people talking about the Chicom, nor sporting it in multiplayer matches, but the truth is that it’s an amazing weapon.

Sure, the reason why you might not be seeing more of it is that it only unlocks at level 130, but once you get it, you have a perfect weapon to grab some points.

This is an extremely balanced weapon, perfect in my opinion in all areas. It could have a slightly better range, if you are to ask me, but even its starting 40 is good enough! Here are its base stats:

These are already some amazing starting stats, making the Chicom one of the best weapons in the game. Which will get even better as you bring on its attachments, increasing accuracy and range, as well as damage.

So, with it, equip the Red Dot Sight or the Holographic Sight (depending which one you prefer), the Laser Sight Attachment, the Foregrip and the Long Barrel. With these things equipped, you do get a flawless weapon!

As a bonus, the more opponents you kill, the faster it will reload – so no real need for an attachment that deals with that!

We’re now moving to one of the weapons that you unlock very early in the game – and one that is extremely good, especially after boosting its stats with some new attachments.

This isn’t the most accurate weapon in the game – and its range is not great either – but it deals a ton of damage, it has solid fire rate and mobility and quickly takes out enemies when it hits the target. So if you generally are good at aiming, you’ll have no problem with this weapon.

Here are its starting stats:

In terms of attachments, I recommend the Holographic Sight, combined with the Laser Sight for increased accuracy, the Foregrip for the same reasons and the Long Barrel. This way, you get increased range and accuracy, fixing its biggest problems.

I didn’t really like the AKS-74U at first because of its poor accuracy and recoil, but after playing it for several games, I realized that it’s actually a really solid weapon that gets those kill streaks easily!

This is one of the starting weapons of CoD Mobile and definitely a fan favorite. It’s easy to use, it has insane accuracy from the start, as well as a solid range, making it a perfect overall weapon for both beginners and more advanced players.

Its biggest problem is that it doesn’t deal a lot of damage – on the contrary – but the solid aiming and good range compensate. It’s not the absolute best weapon in the game, but it’s definitely a top choice!

Here are its starting stats:

When it comes to equipment for it, put that Tactical Scope-AR to increase its range and Accuracy, then the Laser Sight for even more accuracy, the FMJ-AR to have it do some more damage, and the Quickdraw AR so that you can aim faster.

With all the attachments in place, the M4 becomes a really solid option: a reliable weapon that will take out enemies easily, giving you the chance to score those headshots like no other!

Now this is heavy artillery! Basically, an upgraded version of the M4, dealing more damage and having a much bigger range. As a downside, it’s not just as accurate and doesn’t fire as often as I’d like it to, but it’s still really good.

As a bonus, you also get a slight boost of speed when respawning, meaning that in some cases you will be able to maybe rush towards the enemies while still invincible and take them out easily.

But the M16 is definitely not a close range weapon, as its stats below clearly show it:

I would say that the M16 is the Chicom’s little brother (or sister): not as good, but definitely up there and better than most options.

And you can make it even better with the correct set of attachments: start with the Tactical Scope-AR for increased accuracy and range and simple aiming. Then, add the Laser Sight, the Foregrip and the FMJ (already classic attachments, I would say) and you’ll have a might decent weapon on your hands!

And last but not least, we have this little beast: the AK 47, which is an improved AKS-74U that has all the chances of becoming your favorite weapon for a long, long time.

Sure, it suffers from the accuracy problem that the other AK suffers from – and it’s even worse, actually – but you will see that you will be able to wreak havoc with it nevertheless.

Here are its base stats, and don’t get too scared of that Accuracy: we’re going to fix it a bit, and turn this weapon into a monster!

Why no Sniper Rifles or Shotguns?

It really depends on what game mode you’re playing. If you are mostly playing Battle Royale, then the Sniper Rifles will become a bit more important, as you don’t need fast fire rate and you’ll spend most of your time camping and waiting and being tactical.

That is not fun, in my opinion, though and this style of play doesn’t really work in the fast paced traditional multiplayer. Here, you will need weapons that can shoot fast, which allow you to move fast because this is how the game is intended to be played.

With a sniper, you have no chance in close quarters combat and you’ll still get relatively few kills each round because it will still be difficult to hit those moving targets.

The shotguns, on the other hand, are really good for close quarters combat, but you won’t be in such a situation too often. Shotguns are pretty much useless at long range, meaning that once again you will have a tough time getting those kills.

When it comes to secondary weapons, things are a bit easier because we don’t have a ton of options. And I would say that, even though the rocket launchers can offer an advantage in some situations, resulting in multiple kills if used well, if you want just that: a secondary weapon to use in case you run out of bullets, then your best choice is one of the two pistols.

The MW11 is probably the best choice here as it has decent damage and accuracy, as well as fire rate. The J358 is good as well, but very slow to fire so unless you’re very solid at aiming, you will do better with the former.

You can also improve your pistols with some attachments – like the Laser Sight, SMJ and the Extended Mag, but most likely you won’t have to use this weapon too often in your games.

IF you see that you don’t really end up needing it, then just switch to one of the rocket launchers and use it first in battle, trying to hit as many opponents as possible by aiming at places you know they usually pile up… then go all in with your main weapon only. Commando style!

So these would be the best weapons in Call of Duty Mobile, in my opinion. If you have different favorites, don’t hesitate to let us all know by sharing your thoughts about them in the comment section below!

And if you want to move forward with the in-depth strategy articles, check out the best perks in the game. 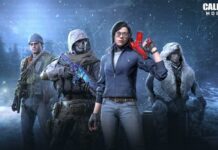