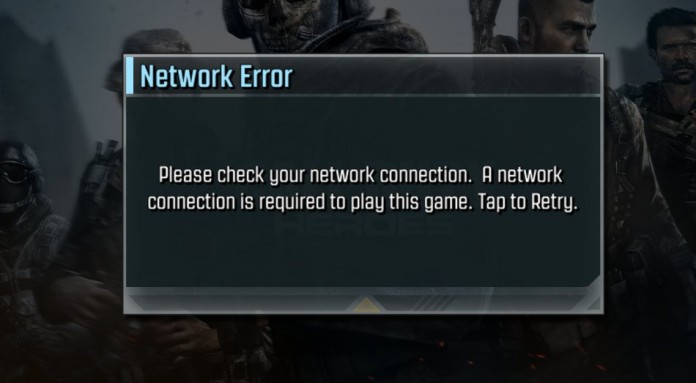 Activision launched their own take on the Clash of Clans strategy genre with ca Call of Duty-themed game, Call of Duty Heroes, and apparently they weren’t ready for the popularity and huge traffic that this game received as soon as it launched worldwide, which is pretty strange because we all know that CoD is one of the best selling games every year.

Either way, the game is now plagued with a Network Error message that doesn’t allow people to connect and play the game and it will probably last just a little bit longer, until interest cools off a little bit or Activision decides to inject some extra horse power into their servers. People who get this Call of Duty: Heroes Network error see a message like the one I have posted in the photo attached to this article, and the text says:

In my case, the error didn’t allow me to even start the game once and, funny enough, it came just after CoD:Heroes finished downloading some game files. Which means that there’s no netowrk problem on my behalf and everything works just fine: I can play other online games and surf on the internet.

This means that the wave of players that have downloaded and played – and are still playing Call of Duty: Heroes today simply took Activision by surprise, together with their game’s server. Which means that there’s not much you can do on your end to make the game work, rather than wait for a fix to this solution from Activision themselves.

However, you might want to make sure that indeed the Network problem is not from you: normally, if you can surf the internet, it’s not your problem. Also, try to completely remove Call of Duty: Heroes form your device’s cache (after quitting the game, double tap the home button and swipe the game’s window up or down) and restart the game: it might work. If not, just wait a little bit until the developers sort this problem out.

I certainly am aching to play this game and I am sure that the same can be said about you. Do you get the “Network Error” when trying to play Call of Duty: Heroes? Have you managed to find a way to fix it?