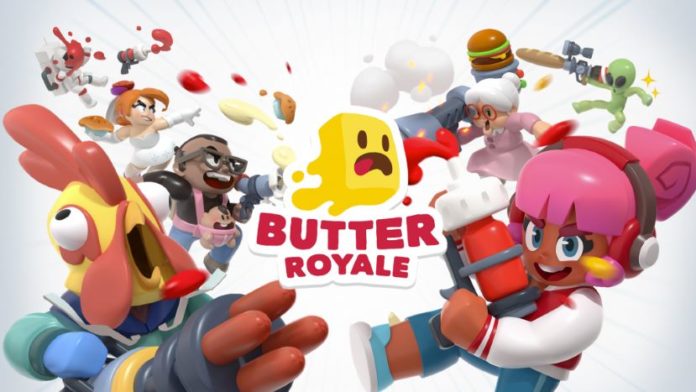 The most flavorful battle royale is here on Apple Arcade! Introducing Butter Royale, the wackiest game show that features hectic battle royale mayhem that you all know and love. 32 contestants go in, but only one will emerge as the winner! Will it be you?

Gear up with armor and weapons!

Butter Royale plays like a simplified version of the battle royale genre, but most of the staples are here. Choose a location to drop somewhere on the map, then scamper around looking for weapons. Keep an eye out for enemies, and take them out before they know what hit them!

Your first order of business when you to land is to find some weapons. Your starting weapon is a melee weapon, and this should be only be used in emergencies. You will come across a common weapon soon enough, just keep looking, and try to avoid fights in the mean time.

When you do pick up a weapon, you can fight back if need be, but we recommend armoring up before you take on any serious fights. If you explore some more, you are bound to come across armor pickups.

Once you have a decent amount of armor and you have a good weapon, you are ready to hunt down other players. Be sure to keep an eye out for the yellow ammo boxes to refill your weapon.

Look for trails while hiding your own!

Wherever you go, you will leave a trail of footprints behind you. Be careful when you are fleeing from enemies, as they can use this to stay on your trail. To truly lose an opponent, you need to go completely off screen and move around in a circle enough so that your footprints do not track you.

Conversely, you can also use this to your advantage. If you hear an enemy walking around nearby, keep an eye out for any tracks that will lead you right to them.

There are certain objects, like a field of corn, a tall bush, or a tent, that hide you when you walk inside them. When you are inside one of these objects, your character is completely invisible until they fire their weapon or if they are hit.

You can use this to your advantage by hanging out in a hiding spot until someone comes by, then you can ambush them and take them out. Just note that eagle-eyed players may be suspicious, so beware of random weapon fire!

Be careful when you approach bushes and the like. If you see leaves rustling around the grass, that means that there is someone hiding in there, so approach with caution!

Recover health and take a breather!

If you engage with an enemy and they have a better weapon than you, you must rely on pure skill to take them down before they can get you. If you start losing the fight, it may be a better move to retreat for now.

Do not be afraid to turn tail and run, as doing so often leads you to live to fight another day. If you see any health packs along the way, be sure to grab them or note where they are so you can quickly recover. Your health does not recover on its own, so you need to find health packs to restore your missing health.

Every so often, you may be notified of a delivery crate being dropped somewhere on the map. It will be marked on your minimap, and you will also have an arrow that points you to it. If you are in the area, you should try for these crates, but be prepared for a fight.

Delivery crates must be stood next to for a few seconds in order to open them, and they contain armor, one of the more rarer weapons, and a few health packs. You will often run into other players, so try to get the jump on anyone who is trying to open the crate.

You are only as good as your currently equipped weapon, so make sure you know the in’s and out’s of every single weapon! There are only a few weapon types in Butter Royale, so you should be familiarized with them in no time.

When you have no weapon equipped, your contestant will default to their melee weapon which is a… baguette! As you can probably imagine, running up and smacking people with a long loaf of bread is not the smartest idea, and this should only done out of pure desperation. Find a weapon as soon as possible!

The most common weapon in Butter Royale, the Relisher is a short-range rapid firing condiment blaster. It is a good weapon in just about any situation with its high rate of fire, but the range may leave you at a disadvantage against the other weapons. If your opponent has a longer range weapon, be careful when approaching them as they might just pelt you over and over again as you try to get closer.

An extremely short-range weapon that fires five globs of mayonnaise in a wide cone. The Mayonator 3000 does extreme damage if you can get right up into people’s faces and blast with them with all five shots!

Of course, this is easier said than done, as adept players will immediately backpedal away from you when they see you using this weapon. Use hiding spots and try to ambush your opponents! Getting the drop on your enemies is very important when using this weapon.

A long-range weapon, the Gumballer will pelt your foes from far away. It has longer range than The Relisher, but it has a slightly slower rate of fire. Thanks to the long-range though, you can fire away at people from a safe distance. This is our go-to weapon for most situations, as the range advantage is very important to survival.

These three weapons are the most common weapons you will find just lying around. The next set of weapons are much harder to find, and you will rarely find them out in the wild. You have more chances of finding these weapons inside delivery crates!

A snipe rifle that covers your opponents in melty cheese! The Sniparmesan is the longest-range weapon out of all of them, and your camera is even zoomed out to give you a bird’s eye view of your surroundings.

With the lowest rate of fire, the Sniparmesan requires pinpoint accuracy as missing a shot could prove fatal. In the right hands though the Sniparmesan can easily be the best weapon because of its extreme range.

Ever wanted to launch explosive baguettes? Well now you can, with the power of the Breadzooka! After a few seconds of aiming, this thing will shoot out a baguette packed with bombs.

A direct hit will deal extreme damage, and anything caught in the blast radius will take some splash damage as well, making it the perfect weapon to take out grouped up enemies. While the Breadzooka is powerful, you only have a few shots with it so make it count!

If you see someone with this weapon, it is best to keep your distance as it beats out most weapon. Counter them with a long range weapon like the Sniparmesan.

That’s all for Butter Royale! Stick to your survival instincts, find the best weapons, and you should be able to survive! If you have any other tips or tricks to hare, let us know in the comments below! 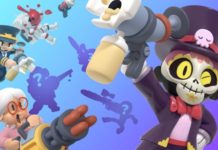