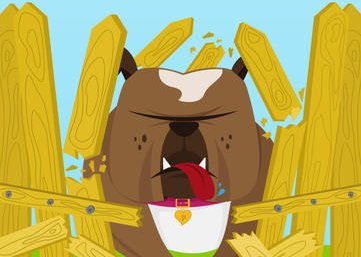 So let’s not waste any time and let’s check out below the Bustr the Bulldog cheats and tips!

1. Always stay in the middle lane
No matter if you jump or stay low, if you just got past an obstacle that’s at the extreme right or left of the screen, immediately return to the center of the screen. This is the easiest way to make sure that, no matter where the next obstacle is, you’ll get to it as fast as possible. Which in this game is vital!

2. Play with your index finger
You might want to look cool playing the game with your thumb, but the truth is that you will fail. Be old school and old fashioned and play the game using your index finger. It will be a lot easier to guide the dog around and perform the jumps.

3. Tap the dog
Although you can hold anywhere on the screen and slide your finger, I realized that there’s a better coordination if you actually tap the dog and not the area beneath it or above – because moving your finger moves the dog exactly to the same position and you don’t have to confuse your brain even more with this.

4. Relax
Yeah, I know it’s pretty difficult to do that after you’ve sent Bustr the Bulldog face forward into the fence 14 times, but the angrier you get, the more difficult it will be for you to keep going. So take deep breaths, maybe even short breaks from playing and give it another go when you’re calm.

5. Don’t jump too early
A poorly timed jump (too early) can result in a game over too, even if you are on the right lane and you are supposed to jump. So make sure you release right on time, right before you’re about to hit that fence, then quickly tap the screen again to be ready for the next obstacle.

6. You game better as you play
I found out that you tend to reach your top potential about 5-7 minutes after you start to play. The first few tries are dreadful, then you are getting better and better, you are starting to get adjusted to the increased speed and eventually you will get your high score. Just don’t play for too long or you will start losing focus, getting tired and fail miserably.

In the end, Buster the Bulldog aka Busty the Bulldog is a really difficult game, just like Flappy Bird. Don’t expect to “win” it – there’s nothing to win here, just the respect of your friends when they see your high score. And hopefully our tips and tricks will help you get there – so share with us your score and let the world know how good you are!