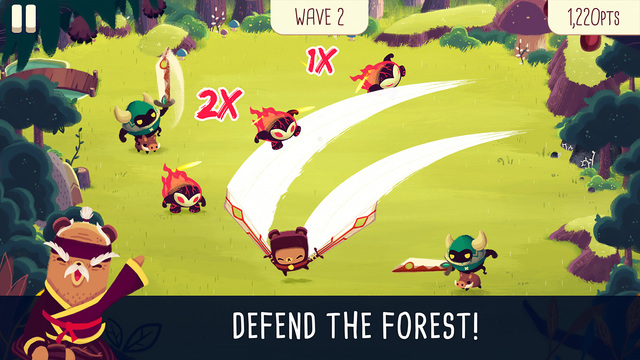 Your forest is under attack by evil demons! Grab your swords and prepare to fend them off in Bushido Bear! You thought bears were bad news by themselves, didn’t you? Well give one a sword and now things are getting really heated! Elegantly slice and dice your way through hordes of enemies, chaining swift combos together for maximum points. We’ll help you score high with our Bushido Bear cheats, tips and tricks strategy guide!

Remember: you want your swords to collide with the enemies, not your actual bear! If your bear runs into the enemies, it’s game over! Try to think of your bear like a pac-man shape, or a pizza with a slice missing. Keep in mind that each enemy type has its own kind of movement, but for the most part enemies will slowly inch towards you once they spawn. Make sure you compensate for the distance and how fast your bear travels. What looks like a safe path might end up dangerous if an enemy moves into your line of movement!

In this game, quests come in sets of three objectives. Completing the entire set will reward you with much-needed coins and sometimes even little prizes. You want to complete as many sets as you can not only for the rewards, but also to progress through the game. You don’t unlock future levels by beating enough waves, instead you unlock by them completing a certain quest set.

3. Upgrade your bear for maximum performance!

Each bear comes with their own stats and skills. Sword size is self-explanatory, attack speed increases the amount of times you swing in one pass, and dash increases your dashing speed. The most important upgrade however is your bear’s unique Final Attack. This special skill must be unlocked with coins before it can be used, and it must be activated under special circumstances. For example, Ninja Bear’s final attack is “Whirling Blades”. Hitting two enemies in a single attack will activate it, and he’ll perform a whirlwind attack, useful for hitting nearby enemies. Be sure to read up on each bear to see how to activate their final attack!

The more enemies you defeat in a single dash, the bigger your multiplier will be, which means more points for you. When a new wave starts, try to wait a little bit to see how many enemies are spawning. If they’ve all spawned in, try to take them out with one dash. If you need to, you can also wait and let your enemies move a little before so that they’re in more favorable positions. Just keep an eye out for the ones that fight back or have unusual movement patterns!

To unlock another bear, you must donate coins to the shrine. It’s 100 coins but it’s definitely worth it. You see, every bear you own is considered an “extra life”, meaning that if you lose with one bear during a level, you get to continue exactly from where your last bear left off if you have one in reserve. The more bears you have, the farther you can get during the levels. Don’t skimp out on upgrades though – only donate to the shrine when you feel you’re ready for another bear!

That’s all for Bushido Bear. If you have any other tips or tricks to share, leave a comment below!