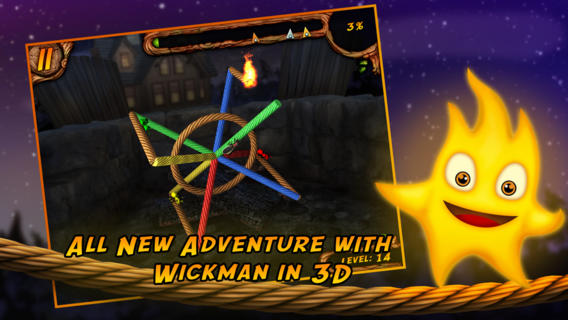 Burn the Rope is one of the most successful mobile series ever released. Despite being so successful, there haven’t been new releases for quite some time, making fans of the series think that the rope had been burned for good.

Luckily this is not the case. A new game of the series has been released on the App Store without any announcement or real promotion.

Burn The Rope 3D features the same engaging gameplay formula of the other game of the series with a notable difference: the game is in 3D now. This isn’t only a cosmetic change, since the game now takes advantage of its 3D appearance to introduce new gameplay features.

In order to burn all the ropes, players will have to use touch screen controls together with the usual tilt ones. This manages to make the game challenging even for those who have mastered the previous games.

Colored bugs are also present in the game. In order to burn the different colored ropes you will have to change the color of your flame by burning the correspondent bug. The bugs add yet another level of depth to a basic but engaging gameplay formula.

Burn the Rope 3D is now available for download on the App Store, costing 2.99$. The game can be played on both iPhone and iPad.

Burn The Rope 3D Now Available On The App Store