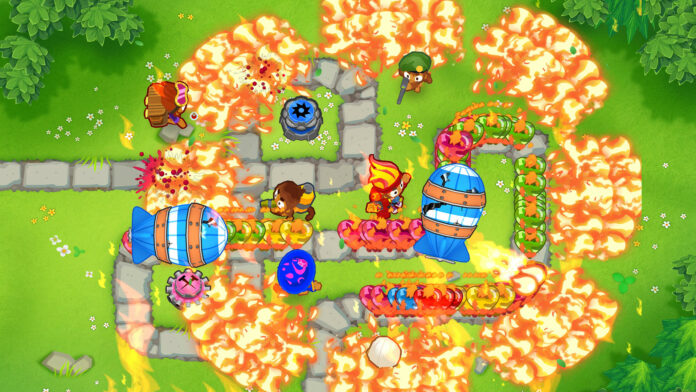 Bloons TD 6 is a great game and one of the best projects in the Tower Defense genre. There you will be able to play on many different levels and some of them have various secrets. It seems that the Encrypted map is quite popular now and there are rumors that it has a secret. Some players may want to learn more information about this level and what it hides. This guide will tell you about the Encrypted map secret in BTD6.

What is the Encrypted Map in BTD6?

BTD6 is a Tower Defense game where you need to use different Monkey Towers to fight against balloons. There are lots of various types of enemies you have to face and some of them are quite tough. However, the most important part is the map you play on as it determines your strategy and which towers you can use.

The Encrypted map looks like a graveyard with many different graves and a certain temple-like structure in the middle of it. It has four coffins, altars, or sarcophaguses inside the building and all of them are covered by rocks. If you want to get access to them you will have to pay your money and remove these stones. There are lots of players who believe that these mysterious coffins hide something and now we will give you some details about this map.

Related: How to Download and Use BTD6 Mod Manager

What is BTD6 Encrypted Map Secret?

The Encrypted map is an interesting level and there you can find lots of exciting things. The four sarcophaguses in the middle of the stage serve as platforms for your towers. Each of these coffins has its own color and you can build only a certain type of towers on them.

There are some rumors that if you build the correct towers on the four coffins then you will unlock a certain secret. Unfortunately, we are going to upset those who believe it. The only hidden thing that you can find on the Encrypted map is the four altars that you can unlock by clearing them from stones. Also, there is a skeleton hand and a skeleton fish that appear when you tap on graves three times.

It seems that there is no major secret for the Encrypted map in BTD6 and it is unlikely to be discovered as the level exists for years and it is well-explored. Good luck in your battle against balloons!