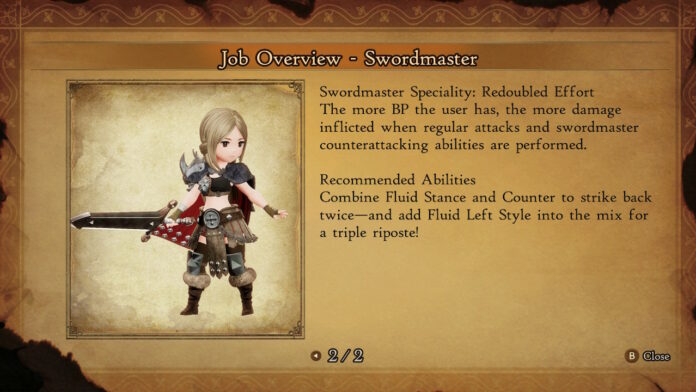 Among the Bravely Default II Jobs that are geared towards offense, the Swordmaster is definitely among the most interesting, as it features a variety of abilities that not only let it obliterate regular enemies quickly but also deal tons of damage to bosses while protecting the party, with the right setup.

Here’s everything you need to know about the Swordmaster in Bravely Default II.

The Swordmaster Job comes with some amazing stats that make it a very solid Job choice. With decent HP and high Strength and Agility, this Job can dish a lot of damage, get more turns than most of the other Jobs and even take a few hits.

To reach its full potential, the Swordmaster must be played differently depending on the type of battle. For regular battles, using Solid Stance is more than enough to deal with enemies, as this ability lets the character unleash two attacks every time the Attack command is selected, while Fluid Stance is better for boss battles, as it lets the Job counterattack. The latter ability becomes even better with the right combination of abilities, especially those from tanky classes that make aggroing enemies the main focus of their game plan, like the Shieldmaster. Add in the ability to hold select weapons with two hands with the 2 Hands Are Better Than 1 ability, and you will be able to deal with any sort of enemy with ease.

The Swordmaster starts with the Redoubled Effort speciality which increases the damage of attacks and counterattacks the more BP the user has. The second speciality, learned at Job Level 12, is Double Duty, which activates sub-job specialities when wielding the same type of weapon in two hands.

The Swordmaster Special Ability, Severance, possibly makes the Job even more deadly, as it increases the user’s speed and critical chance by 15% while dealing massive physical damage to a single target. To unleash this ability, you need to use Swordcraft 13 times.

The Swordmaster learns a mix of stances and flurry abilities that make the Job extremely versatile in dealing damage.