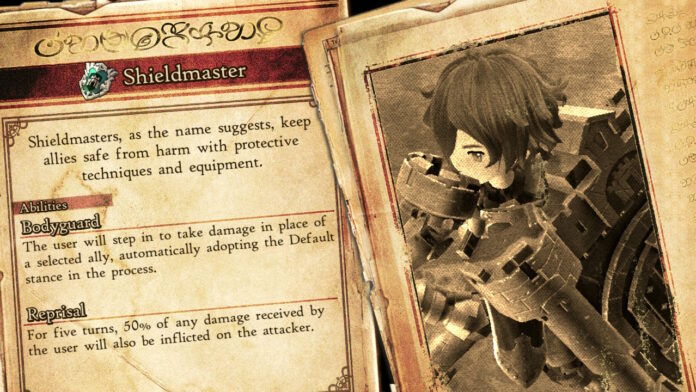 Most of the Jobs included in Bravely Default II are geared towards dealing damage to enemies, but there are a few ones that are geared towards defense, providing the party with a high level of protection that can make a difference in the most difficult boss battles. Among these defensive Jobs, the best one is the Shieldmaster.

Here’s everything there is to know about the Shieldmaster Job in Bravely Default II.

The Shieldmaster is the ultimate defensive Job in Bravely Default II. This Job comes with amazingly high HP, Defense, and Magic Defense, making it a great tank that can take more than a few hits. Some of its abilities let it become even more of a defensive powerhouse, granting the ability to aggro enemies and even wield two shields. The Defender of the People ability, which can block up to three attacks, is the ability to use during boss battles, although it cannot protect allies against attacks that target the whole party.

This Job’s main downside, however, is the terrible Agility, which means that it will get fewer turns than most Jobs in battle. This is an issue only if you’re giving the Shieldmaster an offensive sub-Job, as its innate abilities last for more than a few turns. Fast Hands, which converts the speed reduction from heavy weapons, solves this problem, so if you want to turn your tanky Shieldmaster into an offensive character, you will be able to do so without any major penalty.

The Shieldmaster Special Abilities augment the Job’s defensive capabilities considerably. Protect Ally shields any ally who is in critical condition, while Chivalrous Spirity restore MP and increases BP by one when Protect Ally, Bodyguard or Defender of the People are used in battle.

The Portcullis Special Ability makes it possible to share the Shieldmaster amazing defensive abilities with the rest of the part, as this ability increases all allies’ physical and magical defense for three turns while increasing physical attack by 15%. To use this ability, you must use Shieldcraft 12 times.

All of the Shieldmaster abilities are geared towards attracting aggro, increase defense and protect allies.