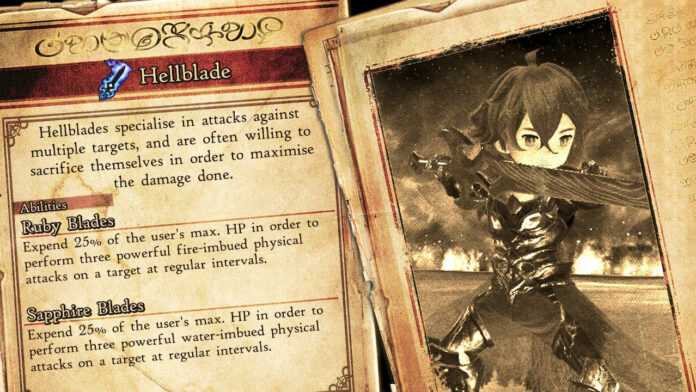 Every role-playing game featuring a Job or class system needs to feature a Dark Knight class, and in this regard, Bravely Default II doesn’t disappoint. The Hellblade, the game’s unique take on the Dark Knight Job, is among the Jobs you will get late in the game, and one that can turn the tide of battle in an instant with its powerful ability.

Here’s everything you need to know about the Hellblade Job in Bravely Default II.

The Hellblade Job is an offensive-oriented Job coming with high HP, Physical and Magical Attack, and acceptable Defense and Magic Defense. With such stats, this is a Job that is meant to be on the frontlines to fight enemies head-on.

The Hellblade is among the most powerful Jobs in the entire game, thanks to its Diabolism abilities. These abilities let the Hellblade deal physical and elemental damage in exchange for its HP, which is something of a double-edged sword, as you need to keep an eye on the Job’s HP while Braving, as you may end up depleting your HP while on the offensive. In case you like to live dangerously, you can take advantage of low HP with the Minus Strike ability, which lets the Hellblade inflict more damage the lower HPs are. Couple this with the Swordmaster‘s 2 Hands Are Better Than 1 ability, and you will be able to deal tons of damage that can potentially take down any enemy in just a few attacks.

The Hellblade specialities play well with the Diabolism abilities, providing restoration and buffs when certain conditions are met. The starting speciality is Deal with the Devil, which restores 8% of HP and MP every turn, but causes the Hellblade’s BP to go -3 if knocked down. The second speciality, learned at Job Level 12 is Strength in Adversity, which increases attack, magical attack, defense, and magical defense by 10% every time you take 25% HP damage.

The Hellblade Special Ability is Ruinga Sword, a powerful non-elemental attack that hits all enemies and increases attack power by 15% for the entire party. To use this ability, you need to use Diabolism abilities 13 times.

The Hellblade’s Diabolism abilities are extremely powerful, letting the Job deal even more than the 9999 standard value.