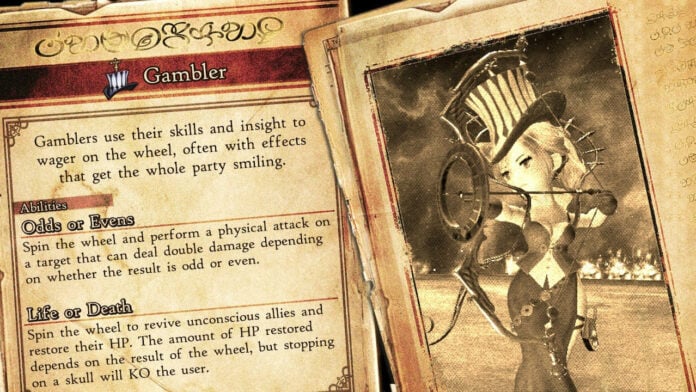 The Gambler is among the optional Jobs in Bravely Default II, so it is entirely possible to complete the game and reach the regular ending without unlocking it. You would be missing out a lot, however, as this Job’s unique abilities are quite effective in a variety of situations, going as far as making grinding way less frustrating.

Here’s everything you need to know about the Gambler in Bravely Default II.

While it may not look like it, the Gambler is an amazingly versatile class that can do a lot of things well. Despite its not exactly amazing stats, not counting Magic and Agility, this Job can deal tons of damage with some of its abilities like High Roller and Flash the Cash. These abilities, however, need tons of PG to activate, so you should use them only against powerful enemies and bosses.

The Gambler can also be played as an extremely effective support Job. The Jackpot Special Ability restores all of the party’s MP, making the Job essential if you have multiple mages in your party.

As already mentioned, the Gambler is a great Job to use even if it is just for grinding. The All or Nothing specialty has the chance to multiply earned Experience, JP, or PG by 15 at the end of each battle, while the Rare Talent ability increases rare items drop rate by 10% for each party member that has the ability equipped. Bravely Default II has some very low drop rates, so this ability is extremely important.

Alongside the already mentioned All of Nothing specialty and Jackpot Special Ability, the Gambler also learns Born Luck at Job Level 12. This specialty increases the number of winning slots in roulette abilities, which makes all of these abilities way more useful.

The Gambler’s abilities are unique among the rest of the Job lineup, as they require PG to activate, instead of HP or MP.