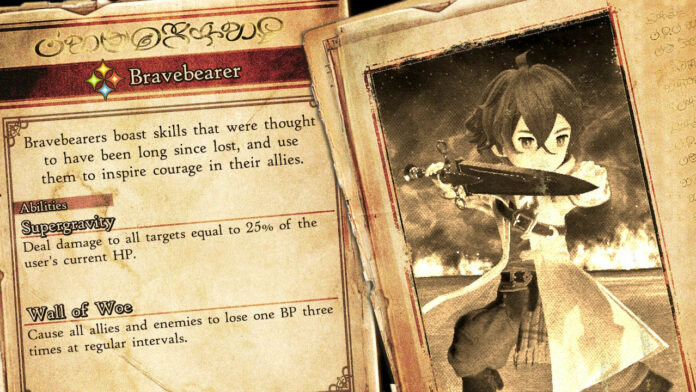 The Bravebearer is one of the optional Jobs included in Bravely Default II, but it is one of those Jobs you definitely don’t want to miss. Not only it has to be unlocked to experience the game’s True Ending, but it is also one of the most powerful and versatile Jobs in the entire game.

Here’s everything you need to know about the Bravebearer in Bravely Default II.

The Bravebearer is possibly the one Job, together with the Freelancer, that gives you total freedom in the sub-Job selection, as all of its stats are extremely high. This is balanced by the average weapon aptitude in every weapon type, so if you’re looking to specialize in physical damage with a specific weapon type, you will have to level up certain Jobs to obtain specific Lore abilities.

Even with the low weapon aptitude, the Bravebearer is a force to be reckoned with on the battlefield, thanks to its many unique abilities that let it restore BP and steal it from the enemies, depriving them of turns. These abilities are not that good at dealing damage, with the exception of the Gravity skills, so you should consider pairing the Bravebearer with another high-damage sub-Job to increase the Job’s offensive capabilities.

No matter which sub-Job you pick, however, you will be able to make the best out of it thanks to the Sub-Job Specialty 2 passive ability. This ability activates the second specialty for the picked sub-Job, opening up some very powerful combination that can be truly devastating.

The starting specialty of the Bravebearer is Adrenaline, which increases its BP by one every time an enemy is defeated. The second specialty, learned at Job Level 12, is True Grit, a powerful ability that increases BP by one at the start of each turn.

The Bravebearer Special Ability is Limit Break, a powerful physical attack that deals damage to a single enemy while increasing all of the party’s BP by one and physical and magical attack by 30%. To use this ability, you will need to use Bravery abilities 13 times.

The Bravebearer Bravery abilities focus on increasing the party’s BP while taking it away from enemies.