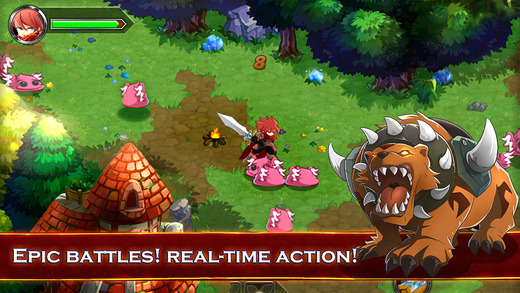 Dimensional rifts are opening and now enemies from all over are pouring into your world! Take up your arms and fight them off in Brave Trials! Brave Trials is a new action RPG that lets you pick from different classes to unleash a variety of attacks and spells against the forces of evil. We’ll help you survive the onslaught with our Brave Trials cheats, tips and tricks strategy guide!

Brave Trials is all about your character and your faes, so let’s get started with our Brave Trials guide to 3-starring all the levels!

Tapping the big quest button at the top right corner of the screen will make your character automatically go towards their next objective, whether it be a person you need to talk to or the trial warp gate. Basically, if you’re ever unsure of what to do next, just tap that big ol’ button in the corner and you’ll head to your next objective automatically.

2. Keep your equipment upgraded and updated!

Your character’s overall strength is determined by several factors, but the two main ones are your equipment and your faes. Equipment is especially important because both you are your faes can equip them. Each piece of equipment can be enhanced by tapping on it and selecting enhance, up to a maximum of level 24. Be sure to do this, as you get plenty of gold to spare by doing the story quests.

3. Develop your faes to increase your overall power!

As you level up your character, you will unlock fae slots so you can bring faes with you into battle. These faes are important as they add to your overall power level, so make sure to keep them powered up! Faes can be leveled up in two manners: you can either fuse them with other extra faes, or use faessence. New faes and faessence are obtained through playing the levels, so you’ll end up with both after a while. Whatever you choose, keep your faes leveled up! You can also upgrade certain faes if you have enough upgrade stones. They get big stat boosts from this! Green and white named faes cannot be upgraded, however.

4. Collect your achievement and quest rewards!

By clearing out certain trials with enough stars, you can claim rewards. These can either be gold, gems, equipment, or upgrade materials. This button will appear at the bottom right corner of the screen, and it’ll be shining. On top of that, you can also claim achievement rewards at the top of the screen. So pretty much, if you see a button with a shining yellow beam circling it, be sure to check it because you might have a reward waiting for you!

5. Auto-play to get through the level!

After you hit level 5, you can enable auto-play when you’re in a level. This lets the computer take control of your character and you will automatically destroy all the enemies. The game pretty much plays itself and most of the time it does it fast enough to earn you three stars on the level. If you don’t feel like going through the level yourself, just flip on auto-play and go make some coffee or something. In a couple minutes, your character will be done with the level!

6. Stick to the story quests before you attempt the arena!

The arena is where you’re put up against other players’ characters. You might be able to find an opponent roughly around your level, but for the beginning you should stick to doing the main quests so you can power up your faes and level up your character. You can attempt the arena after you’ve powered up significantly so that you’re ready to fight! The rewards are pretty good, too.

That should be a good starting point for your quest. If you have any other questions or suggestions, leave a comment below!