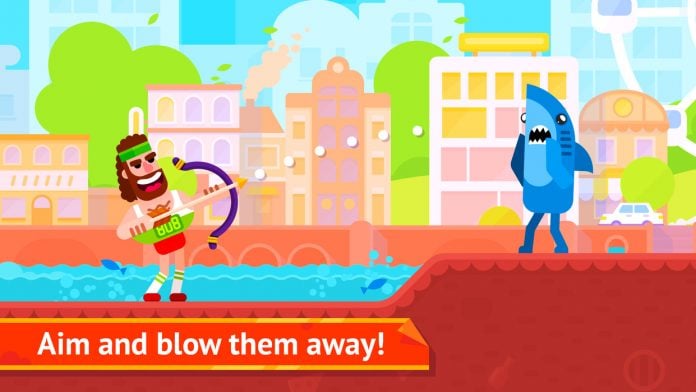 Aim, pull, shoot! Bowmasters is an all-new one touch game about precision strikes. Choose from a variety of wacky characters with even wackier weapons and duel to see who is the bowmaster! When it comes down to it, this game is mostly about your own calculations and aiming skills, but there are a few tips we can go over, so let’s get started with our Bowmasters cheats, tips and tricks strategy guide!

1. Remember your angle and power!

This is a game all about pinpoint precision and accuracy, so you’re going to have to do some math to make sure your shots will land! On the very first shot of the match, you have to eyeball your shot. Before you shoot, make a mental note of the power and angle you used. From there, you can start doing some calculations to determine where your next shot will land. Did your shot go over your opponent’s head? Either reduce your power or lower your angle, or maybe a bit of both. The game doesn’t keep track of your previous trajectories so you will have to do it yourself.

2. Try out all of the weapons!

When we tried out new characters after unlocking them, we discovered that the new weapons that each character has isn’t just a reskin – they actually function differently! Here’s a quick rundown of the weapon types we were able to experiment with.

If you need some coins, bird hunt is usually the way to go. If you can get at least fifteen birds, you’ll be able to rack up around 300 coins. Just be sure to grab every timer power up you see, as they add a couple seconds onto your time limit. If you can grab each one that spawns, you should be able to keep playing for at least a good two minutes. We would also recommend apple shooting, but after three successful shots, the distance becomes a little too far and it’s quite challenging.

That’s all for Bowmasters. If you have any other tips or tricks to share, leave a comment below!