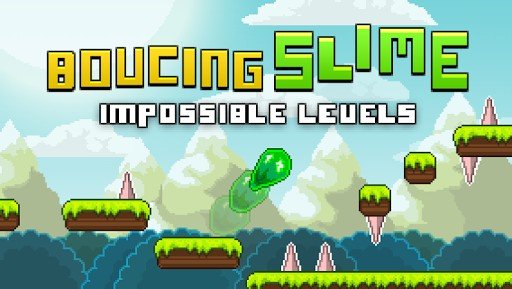 We have some Bouncing Slime cheats and tips for you in this article because a game that says that it has “impossible levels” is clearly one that you need help with, even though the first several levels don’t seem that impossible… and then level 9 hits and you think that you’ve hit the wall. We’ll help you get past level 9 in Bouncing Slime and with our tips and tricks we’ll certainly help you get over many other levels in the game.

So if you need some help, check out our Bouncing Slime – Impossible Levels cheats and tips below and have fun playing the game!

Don’t try to skip a platform
You will sometimes get the urge to jump over a platform and “skip” it. That’s a bad idea, basically the Bouncing Slime has to step on each platform. So find the perfect way to do it.

Learn to time your taps perfectly
Most of the times, you can find a rhythm for your taps and keep going. The trick is to tap exactly at the right time otherwise you will eventually fail as one mistimed tap leads to another and eventually you will hit an obstacle. This leads us to…

Replay levels over and over
Basically, you have to learn the levels. Fortunately, they are not that long and you will do it pretty fast. It’s really difficult to complete a level without exactly knowing what’s going to happen, so make sure that you learn each platform and each spike, each jump and the exact moment when you have to jump. You’ll always have to be quick.

Take breaks
Eventually, you will get really tired playing the game and you will have to take some sort of a break. I would suggest relaxing for at least 5 minutes before giving a level a try. My first stumbling block was level 9, as I said in the intro, and I was getting worse and worse at it as I was playing. After I took a short break, rested my eyes and calmed down a little bit, I was able to beat the level like pro.

And these would be, for the moment, my Bouncing Slime – Impossible Levels tips and tricks for the great iPhone and iPad game. If you have other strategies that seem to work, let us know. Also, don’t forget to tell us how far did you get in the game!