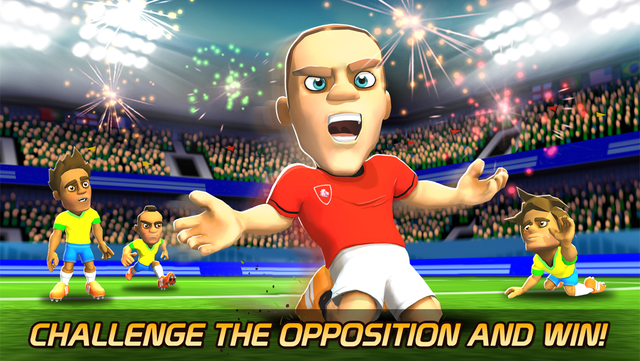 Are you ready to boom? Boom Boom Soccer is an all-new team management soccer game! Recruit players from all over the world, train them to become perfect players, and play in leagues against computer teams and real-life players! Hone your shot skills and become the number one player in the world with the help of our Boom Boom Soccer cheats, tips and tricks strategy guide!

During the Pass and Shot hero moments, keep in mind that your shot is going to travel exactly along the line you drew. This means that if you veer off too much to the right or left, the shot will miss completely. Also, if you stop your line too late, your ball will go too high and miss the goal shot. Keep your lines under control and don’t swipe them with too much power!

2. Switch your team around!

During the team setup right before the kick off, your players’ stats will be matched up with the opposing team. You won’t be able to see what players you’re going up against until you lock in your player choice, but you can be a little preemptive. In each category, you’ll see a stat box to the left of each player. The most important stats for that category will be highlighted in yellow. If you have another player with better stats in those categories, switch them over so that they’ll have a better chance! Remember: the bigger the stat gap between you and your opponent, the easier it will be to make a goal.

Your favorite players can be upgraded if you extra players. Select the player you want to boost, then pick which players you want to sacrifice to power up the base player. You’ll receive low rank players every now and then when you finish a cup, and you’ll probably not use them in your line up. These players are perfect candidates for boosting your better players.

4. Curve around the blockers!

When you’re making Pass and Shot hero moments, make sure to draw clear lines around the blockers. Remember, going off of the first tip, the ball will travel exactly on the path you draw for it. When you need to get around a blocker, a good curve shot should do the trick. You don’t want to curve too much though, as you’ll miss your shot.

The daily rewards in this game work like log in bonuses with one catch: you actually have to work for them! When you log in for the first time in a day, you’ll see a daily reward criteria. They will ask you to do something like play a certain number of matches. It’s pretty easy, and you should do them as soon as you can to get some nice rewards.

6. Try out the daily trophy!

Alongside the daily rewards, you can also compete the in the Daily Trophy tournament. To win the trophy, you just have to play in a league just like in a regular game. At the end of the league, if you manage to win enough games, you’ll be rewarded with a sweet prize box, usually containing some gold or cash.

That’s all for Boom Boom Soccer for now. We’ll be back with another guide on the cards! In the mean time, if you have any other tips or tricks to share, leave a comment below!