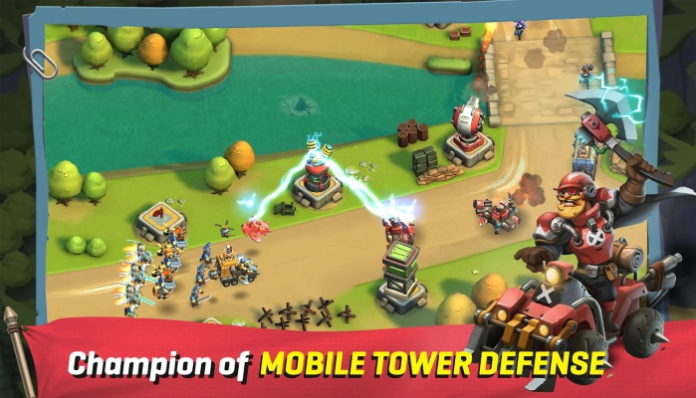 Boom Battlefield is a new tower defense PvP game where you raid other players’ convoys to steal their precious crystals! Trade those crystals for gold, and upgrade your units and towers to defend yourself from other players hungry for your crystals!

Welcome to Boom Battlefield! In this game, you will play tower defense battles against other player’s convoys that are transporting precious minerals. Your objective is to carefully position your towers and units so that they can intercept the convoy and do as much damage as possible, hopefully taking out the entire convoy in the process.

At the start of a battle, you will see a blue line travel through the map. This indicates the path the enemy convoy will take, so you can plan accordingly. What you want to try to do is create “chokepoints,” areas that are basically killzones for the enemies.

Your units are not your main damage dealers. They do damage over time on their own, but their main use is to stop the enemies from advancing. When your units are engaged, your towers are raining hellfire down upon them, which is the best case scenario. The enemies go down fast, and your units do not take too much damage.

Try to pick locations on the map where your towers get maximum coverage to attack the enemy for the best results.

Send your convoy out for gold!

When you win a battle against another convey, you will seize their crystals. Crystals are one of the two main currencies in the game. You need crystal to upgrade your units and towers, so it is important.

However, it is just one of the two! The other currency is gold. Gold is spent on upgrading units and towers, but it is also used for upgrading talents that provide special buffs for you.

You do not get gold from attacking convoys though – you actually need to do convoy runs to get gold. From the main menu, tap on the truck button and you see a list of possible convoy routes.

You must trade your crystals for gold, and each route takes a certain amount of time to complete. You can have multiple routes running at once, so if you have the crystals you can get lots of gold in return.

Each route can only be taken a certain amount of times in a single day. If you exhaust a route, you must wait for the cycle, which happens every day. Make sure you have convoys running at all times, as this is the only reliable way to earn gold.

In addition to the gold, you will also earn a chest full of unit cards inside, which can help bolster your army. The more convoy routes you complete, the bigger your army will be!

Use the right unit for the job!

Every unit has their own strengths and weaknesses, and knowing which one to use in different scenarios is the key to victory. Some units deal splash damage, making them great to taking out groups of weaker enemies, whereas some units are designed for heavy single-target damage.

Whenever you get a new unit you have never seen before, it is a good idea to check their stats and see what they do. Planning is half of the battle, and just throwing out your highest rarity units is not always the best thing to do.

Watch out for air enemies!

Eventually you will start to encounter aerial units. As the name implies, they are units that fly and cannot be targeted by certain weapons. For example, your starting Reaver troops use melee weapons, so they will not be able to attack flying units.

Out of the three types of towers, only one of them cannot attack flying units and that is the Mortar tower. Be sure not to only build a bunch of Mortar towers, as while they are great for wiping out groups of weak enemies, you will not be able to retaliate against a wave of flying enemies.

Here is a complete list of the towers and what they do!

The first tower is the basic Rifle Tower. This is your no nonsense, single target, rapid-fire machine gun that deals constant damage over time to both land and air targets. When it upgrades to its next rank, it deals bonus damage to target that are not moving, which makes this the perfect tower for chokepoints.

The second tower line is the Energy Tower. The Energy Tower lines has similar stats to the Rifle Tower, attacking both land and air targets, but at a slightly slower firing rate. The unique thing about it is that it has natural armor penetration, so it is the perfect counter against the heavier units like the Tank, Gun Ship, Colossus, etc.

The third tower is the Mortar Tower. It launches explosive shells that hit ground targets exclusively, and the explosions deal splash damage. Mortar Towers have a very slow rate of fire, but they do lots of damage to enemy squadrons that are clumped up together.

In general, you will be building mostly Rifle and Mortar Towers to deal with the hordes of enemies. If you are up against a lot of bulky units, then throw in an Energy Tower as well.

Deploy your Protectors with strategy!

When you are setting up your convoy, your Protectors are the units that will go up against other players when they try to attack your convoy. It is very important to set up a good formation, as it may be the different between a successful repel and a failed resistance.

Just like your Raiders, Protectors each have their own strengths and weaknesses, so you have to position them accordingly. For example, Bulwarks have a lot of health and take reduced damage from ranged attacks. They should be positioned in front of the rest of your convoy.

That is just one example of many possibilities, so be sure to do the same thing you did with your Raiders and examine their stats and see what they are good at. Your convoy depends on it!

Talents increase your ability to fight stronger opponents and fend off more raiders. There are five talents in total, and each one must be upgraded using gold only.

The first talent and probably the most important is the Leadership talent. Improving this talent ups your total unit cost cap, enabling you to add more units into your raiding group. This should be the first talent you upgrade!

The third talent is Trader, which increases the space you have on the convoy grid when placing protectors. If you want to reinforce your convoy, be sure to upgrade this as it will allow you position more units.

The last talents are Auto Mineral and Auto Gold. These talents generate the respective resource for you over time, and you simply have to come back and collect the goods. These talents are useful to have as you can make some quick upgrades without having to send your convoy out.

Complete the single player campaign for gold and gems!

If you get tired of raiding other convoys or if you feel that your current setup just does not work without some upgrades, why not try out the single player campaign? You can access it from the bottom left button on the main menu.

In the campaign, you will go against pre-set enemy convoys. They do not change, so it is a good way to get some practice in. Is your current strategy not working? You can try out a new one and see how it does against a practice squad.

One thing worthy of mentioning is that unlike attacking player convoys, completing the campaign level reward you with gems and gold, and a good amount at that! You just need to make sure that you destroy all of the convoy to get all three stars.

That’s all for Boom Battlefield! If you have any other tips or tricks to share, let us know in the comments below!