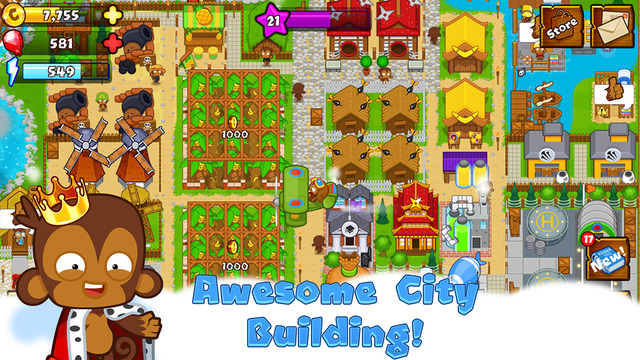 Create your own personalized Monkey City to ward off all of the bloons! Bloons Monkey City is a unique blend of the popular city simulation and tower defense genres. The buildings you construct in your city directly influence your power during the tower defense segments, so you need to build wisely! We’ll lead you to victory with our Bloons Monkey City cheats, tips and trick strategy guide!

Bloons Monkey City is an extensive game, so lets get started with our Bloon Monkey City guide to building the best city!

1. When you first start out, look for the stages with 2 dots!

In order to expand your city, you need to claim more land. To do so, you have to play through a tower defense stage. If you’re successful, the land is yours and you can build whatever you please on it. When you tap an unclaimed land space, a bloons icon and several dots will show up. The amount of dots highlighted indicate how difficult the stage will be with your current equipment. At the beginning, only attempt stages that have two dots. These stages are just right, as you only have the basic dart monkeys to start out with.

2. Spend your coins early on often!

The maximum amount of coins your city can hold at any given time is determined by the amount of monkey banks you have built. The game will start you off with one, but that means a relatively low capacity, capping out at 1,500 coins. You’ll hit this limit pretty fast considering you get about 100 coins every time you claim land, so be sure not to let any coins go to waste by spending as much as you can before you hit that limit. Thankfully though you can build another bank pretty early on, so do that at your own discretion!

3. Check the tower forecast before starting a level!

Before you start a tower defense level, there will be a data box showing you information on towers. The box will show you what types of towers are recommended, and which types are restricted. Early on you’ll probably be stuck with a select few towers, but as your city progresses, be sure to pay attention to the towers it recommends. Try going for those during the levels, and they will also cost 15% less than they usually do!

Not sure what to do next? The quest book will show you the way! These quests will lead you down the general progression path, so if you’re ever unsure of what to do next, have a look in the book. Each quest, when completed, will provide you with some experience and coins as well.

5. Try not to lose any lives on the tower defense segments!

If you manage to complete a tower defense level without losing a single life, you will be rewarded with valuable Bloonstones. These are the premium currency of the game, and are used for speeding building construction up, and continuing should you lose all your lives during a level.

6. Look for the points of interest on the map!

Sometimes on certain land spots, there will be something of interest. Some spots have treasure chests which hold a lot of coins and other goodies inside them. Some spots have captured monkeys that can live in your city if you free them! Some spots have unique looking levels; be warned, these levels are challenge levels are they are very tough and long. Attempt these only if your city has been built up enough! However, the levels also tend to have special abilities you can use to help turn the tides.

That should be a good start for your monkey city. If you have any other questions or suggestions, leave a comment below!