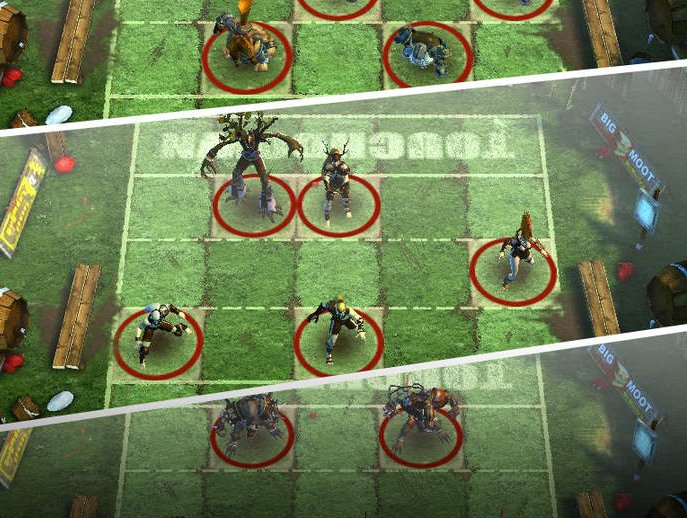 A tactical football game that plays almost like a turn-based strategy and involves Orcs, Dwarves, Elves and Humans battling for supremacy? Multiplayer leagues and a ton of unlockables? That’s exactly what Blood Bowl: Kerrunch delivers, and it does so in a really nice way, offering an addictive and extremely fun product, even though energy limitations and paywalls might upset a few of us. Anyway, we’re here to learn how to get better at this game and for this, I’ll share with you a bunch of Blood Bowl: Kerrunch cheats and tips that will help you win your Matches – Season or League plays and get the most out of this game. Because it is really, really cool!

So let’s not waste a single second and let’s check out Touch, Tap, Play’s Blood Bowl: Kerrunch tips and cheats below! You know you need them!

1. Make sure you understand each stat
There are four main stats and, even though early on you won’t really be able to make a choice due to limited numbers of players, eventually you will have to make a choice. And their ratings are extremely important, so here is how each of their 4 main stats affects their gameplay:

2. Know and check out the skills too
Every player has three different skills that you can improve, each of them offering them some advantages over specific types of players and/or different stats boosts. Although relatively cheap at first, their price increases really fast and you can only spend a few at a time, making the upgrade of skills an extremely difficult process that you have to put a lot of thought into. I would personally suggest to start improving the skills of your two and above star players because those are the ones you’ll be using the most in the long run. However, it’s worth noting that those who are specialized (get boosts against specific opponents, like Orcs only or Dwarves only) are a bit trickier because they only get the boost against that particular type of opponent. So strategize a bit and make a plan when it comes to upgrading, then now how you upgraded the skills of your players to get the most out of them.

Know how these upgrades work, too: you have a Manager/Team level (you can check it out in the upper left corner), which sets the maximum level your players can be. So if your team level is 10, your players can’t be level 11. Also, the player’s level sets the limit on the skill level they can have. In other words, a level 10 player, can’t have a skill level of 11. You can only increase Skills by using SPs.

3. Complete missions and objectives
You have daily missions which reward you a lot of goodies, as well as objectives that you can complete. Check them out daily and make a habit of completing the daily missions on a daily basis to maximize your rewards and the number of resources you’re getting. You will need a ton to upgrade all those players that you’ll unlock, eventually!

4. Evolve your Players
The tricky part – and also nice part – of the game comes from the fact that you can evolve all players and turn even one star players into superstars. You do this by using Player Tokens: you need a specific number to be allowed to evolve your player, and you get Player tokens from two main sources: first, from playing Season matches (but you will only get, in this case, Player Tokens based on the race of the team you’ll play against, and only of equal or lower star value) and from opening chests. Both are pretty random, so being as active as possible and winning as many matches/opening as many chests as possible is the only way to go! Evolving improves your player’s ratings.

5. How to win all your games
The biggest part of the game is, of course, playing against other teams and defeating them. There are a lot of multiple strategies you can use in the game and unfortunately there is no single tactic that works against all teams: because it’s all about the way players are deployed on the field. And even though you will have to adapt your deployment based on how the opponent deployed their players, you have to remember some tricks that will help you win your games:

– since you will always start with the ball, no matter if you play in the Season or the League, you have a major advantage even if some deployment strategies follow the rules I am sharing with you below. Therefore, in order to have a solid defense in the League, think about creating a different deployment setup!
– you will win if you manage to score a touchdown, and usually this doesn’t mean that you will have to take out all the enemy players, on the contrary: you have to find that gap to send a player to the touchdown line and pass the ball to them.
– player roles matter a lot in Blood Bowl: Kerrunch. You should always try to have a thrower hold on to the ball for as long as possible, and have a runner/blitzer/catcher/whatever ready to get to the touchdown line ASAP. There are different strategies here too and I’ve had success with a “tank” lineup as well, but I’ll share what worked for me.
– try to get superiority in one particular area on the field. Get the numbers and get to the end: the easiest way to do this is by focusing on the left or right side of the field.

So, having these in mind, here is how I usually approach each match:

Deploy the thrower on my touchdown line, in the right corner (sides can vary depending on enemy team setup) and give them the ball. Place one Lineman/Tank type of player near the middle of the field (3rd square), in front of the Thrower. Place a second lineman one square to the left and down. Place the runner behind the first Lineman and the remaining player (usually another runner type of player) behind the second. Start the game and enjoy the victory.

I will only pass the ball when I can get the touchdown and I will move my Thrower as little as possible. This works even with the strangest opponent setups – just try it out!

These would be, right now, our Blood Bowl: Kerrunch tips and tricks to winning all games. Let us know if you have additional things to add to help fellow players!