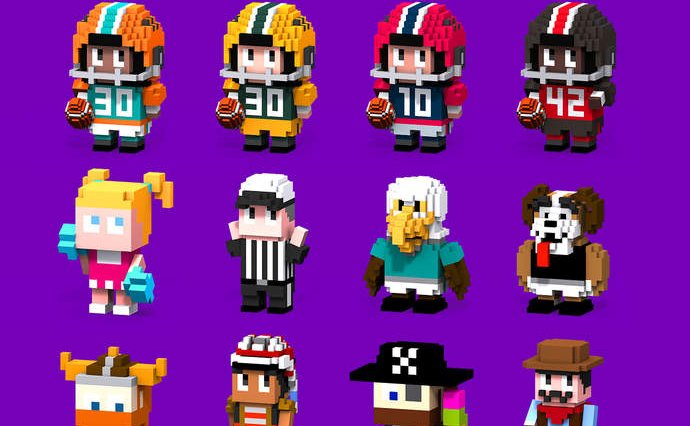 Full Fat Games have just launched a really fun and addictive endless runner / football game called Blocky Football. Charming and easy to learn, but difficult to master, the game is free to play and throws a ton of ads at you, but still remains one of our favorite releases this week. And since that might be your case as well, we’ve decided to share with you some quick Blocky Football cheats and tips that will help you score as many points as possible and unlock all characters as fast as possible, even though luck and skill pay an important role here.

But since any extra bit helps, let’s check out our guide below and read some Blocky Football tips and cheats to help you get as far as possible.

There are multiple things to consider here: the guys in your team (wearing the same jersey) will always be stationary (but it’s still game over if you hit them) while the opponents will always run towards you at different speed. Look at the screen, see where they’re coming from and try to always be one step ahead!

2. Stick to the middle
Usually, it’s a lot better if you stick to the middle lane or try to allow your player as many options as possible: if you can swipe both left and right, you already have more chances than if you’re on the leftmost lane with no real options to escape.

3. Consider the extra points
Whenever an opponent hits a player in your team, not only that they give you a valuable extra point, but they also clear the way for you. So always take this into account as well when deciding what’s the best route for you to choose. However, don’t rush to get the extra points – only get them if they help you run longer!

4. How to unlock all characters in Blocky Football
If paying for the characters is out of the question (this would be the fastest method), then you have to do this by continuously playing the game. You need keys to open lockers that give you a chance at unlocking new characters. You get keys either as free gifts every now and then from the game or by scoring a solid shot at the end of each round you play. However, in order to get the key from scoring, you need not only to hit the green area in the middle of the screen, but also the narrow yellow stripe. So practice as much as possible and eventually you will get the keys from scoring more often than not.

However, getting the three keys does not guarantee a player: you still have to get three identical symbols (out of six), which means that most of the time you will get two of one type and one of another (luckily, there are just two types mixed in). In this case, it’s extremely important to take the game’s offer and watch the ad, which gives you an extra pic. That’s a 33.3% chance of unlocking your character (or whatever goodie is there), but it’s better than nothing. So in the end, the more you play, the more characters you will unlock. But don’t expect it to be an easy job!

These would be for now our Blocky Football tips and tricks. If you have anything extra to share with fellow players, let us know by publishing a comment below.